Each year, the History and Political Science Department recognizes a woman who has made a noteworthy contribution to the civic life of her community; local, regional, national, or international.

She is invited to Cabrini to speak to our students and receive the Ivy Young Willis and Martha Willis Dale Award.

This year’s recipient is Tarana Burke, founder of the Me Too movement and social justice activist.

Register by Sept. 12 to ensure your seat. 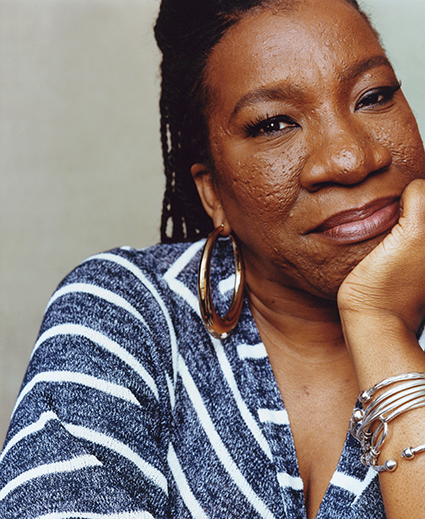 Founder of the Me Too movement and social justice activist

For more than 25 years, activist and advocate Tarana J. Burke has worked at the intersection of racial justice, arts and culture and sexual violence. Fueled by commitments to interrupt sexual violence and other systemic inequalities disproportionately impacting marginalized people, particularly black women and girls, Burke has created and led various campaigns focused on increasing access to resources and support for impacted communities, including the Me Too movement.

A proud native of the Bronx, NY, Burke’s passion for community organizing began in the late 1980s when as a young girl, she joined a youth development organization called The 21st Century, youth Leadership Movement and led campaigns around issues like racial discrimination, housing inequality and economic justice across the city. That work, coupled with a desire to deepen her education and organizing skills led her to attend college and later relocate to Alabama.  Her organizing and advocacy work continued throughout college and remains a pillar of her professional life.

Burke, after attending college in Alabama, began her professional life in Selma, where, over the span of a decade, she assisted the 21st Century Youth Leadership Movement in the development and mentoring of hundreds of youth leaders, served as a curator and consultant at  the National Voting Rights Museum and Institute, played a continuing role in  planning and organizing the annual commemoration of the Selma Voting Rights Struggle and of the events leading up to the 1965 march for voting rights from Selma to Montgomery; and while serving as the Executive Director of the Black Belt Arts and Cultural Center, she created and oversaw cultural programs  for underserved youth from Alabama’s Black Belt.  Burke’s tenure in Selma led to her consulting role in Ava DuVernay’s Oscar-nominated film Selma in 2014.

It was during her time in Selma that her work took an intentional turn toward supporting Black and brown girls in the rural South. In 2003 she co-founded Just Be Inc., an organization committed to the leadership development and wellness of Black girls.  After far too many encounters with young people whose lives were affected by sexual violence, Burke realized how many were suffering through abuse without access to resources, safe spaces, and support. The Me Too movement was born out of the need to fill that void.  In 2006 she began working with students in the Black Belt using me too. as a tool for healing, education, and action. In the years following, the Me Too movement quickly expanded beyond young people to include adult women and men, queer and trans folks and all marginalized groups.

In October 2017, #MeToo became a viral phenomenon that quickly spread around the world and Burke has emerged as a global leader in the evolving conversation around sexual violence and the need for survivor-centered solutions. Her theory of using empathy to empower survivors is changing the way the nation, and the world, thinks about and engages with survivors, and her belief that healing isn’t a destination but a journey has touched and inspired millions of survivors who previously lived with the pain, shame and trauma of their assaults in isolation.

Burke was named Time Magazine 2017 Person of the Year along with the ‘Silence Breakers’, a group recognized for standing up against sexual harassment and violence. In 2018, she was featured on the covers of Time Magazine as one of the 100 most influential people in the world and Variety Magazine’s Power of Women issue. She is the recipient of the Ridenhour Prize, The Change Makers Award from Black Girls Rock and topped the 2018 The Root 100 list as the most influential African American.

The Ivy Young Willis and Martha Willis Dale Award Ceremony and Reception was initially established in 1992 by William G. Willis to honor Ivy, his late wife, and modified in 2014 by John Dale to honor Martha, his late wife and daughter of Ivy and William.

Ivy Young Willis was a teacher, administrator and reading consultant. She was a pioneer in the design of a curriculum for the teaching of reading on television at WQED in Pittsburgh, the country’s first public television station.  In her honor, the award ceremony was established at then Cabrini College, now Cabrini University, to honor a woman who made an outstanding contribution in the field of public affairs.

Martha Willis Dale, former alumni director at Cabrini University for 26 years, modeled her mother’s teaching through her life of service to students, alumni, and the community. This series is dedicated to their memories and strong beliefs that women have a unique talent for improving the climate and conduct of public affairs.

Contributions of support are gratefully accepted.