You would probably expect for a Catholic university to have religion courses, and for them to be a part of the requirements to graduate. Indeed, Cabrini requires its students to take one class on religion; this will be appreciated or not depending most likely on the student’s religious background. Most students who come from non-practicing families can find the thought of taking a course on religion stressful, while students from religious families might look forward to it. In any case, neither of these kinds of students is expecting a religion class like the one Dr. Primiano teaches.

Whatever your thought is on religion, it will be challenged upon taking the Search for Meaning course taught by Dr. Primiano.

I come from studying in Catholic schools my whole life, and I even studied for some time in an Opus Dei University back in my home country, Venezuela. My family is Catholic, but we are not ‘mega-catholic,’ which means we don’t really go to church, but we practice being kind to others and follow Christian morals. I believe I always went to Catholic schools because their standard of education is very good, I think this is a global particularity, and that is why many kids, even those who don’t come from a practicing family, enroll in Catholic or religious-affiliated schools.

I will have to admit that many of my previous religion classes were very boring and bias. I have always liked philosophy, history, and questioning the world around me, so being told what to think was not exactly my cup of tea. Religion can be approached in many different ways, and I think the way we feel about beliefs has a lot to do with how we explore it and get to know about it.

The best academies will teach you to think and to question, not to follow. Because of my previous experiences with religion classes, I was not sure about how much I was going to enjoy taking my religion requirement at Cabrini, but from the first class I realized just what kind of course I was taking: a great one, the kind that you enjoy going to and look forward to.

First of all, Dr. Primiano is a very memorable character. His presence is as compelling as the course he teaches. And I know fashion lovers are always on the look-out to see what he is wearing because he has the best outfits and style. When you see him for the first time, you already sense something exciting is about to happen. And it does. Also, his office is filled with the most interesting college of religious and historical knickknacks ranging from full-on kitsch to classical to folkloric, and it’s a highly recommended Cabrini location. 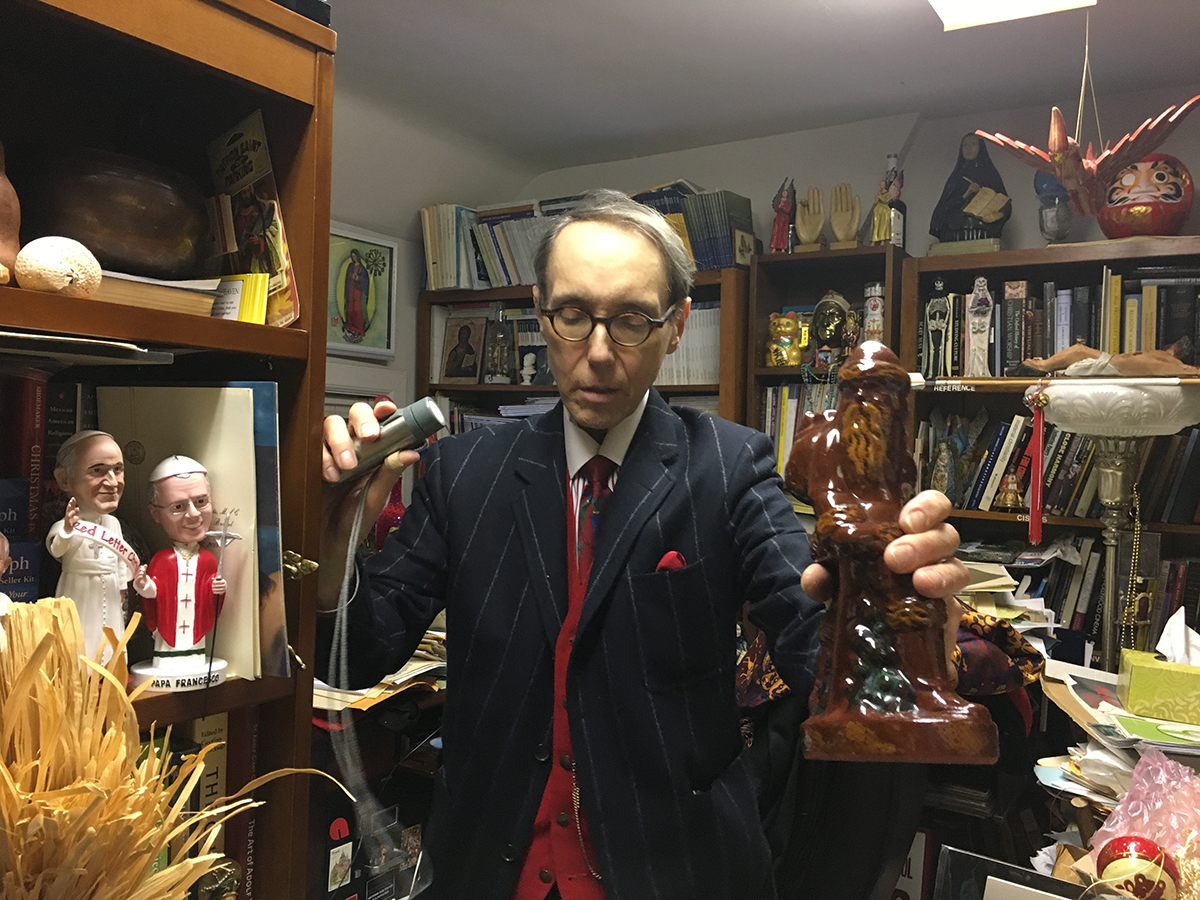 Dr. Primiano’s class is called ‘Search for Meaning,’ and instead of reading from the Bible, we explore all main religions, and also ethnic faiths, to learn about their origins and beliefs. So, for someone who has never read anything about religions or their history, this is a deep introduction into religious literacy and students will come out of the class knowing things they would have never known probably from anywhere else.

Dr. Leonard Primiano is a Folklorist, and as such, he wants to teach his students not only about religion but about the importance of culture in many different groups and ethnicities.

So far, with Dr. Primiano’s class, I have had many unique opportunities. We went to the Curtis Symphony Orchestra, attended several talks with the authors of the books we are asked to read for the class, visited the headquarters of different religions, such as Father Divine’s estate and the Masonic Temple in Philadelphia, and had a meal with our class at Reading Terminal Market.

So far, my religion requirement has been a pleasure to fulfill, and I have had the opportunity to encounter knowledge I would have probably never encountered if it was not for my Search for Meaning class.

So, I encourage other students to take his course and be immersed in this great religious experience.