My Road to March Madness

As a child, I had always dreamed of working in the sports industry and getting to be at major sporting events. Here I am, years later, getting to live out my dream. I chose Cabrini because I knew that I would be hands-on from the start, and the month of March bolstered that decision.

I knew as a Digital Communication & Social Media major that I would get some cool experiences, but once the department added a Sports Communication minor, it would be exactly where I wanted those experiences to be. 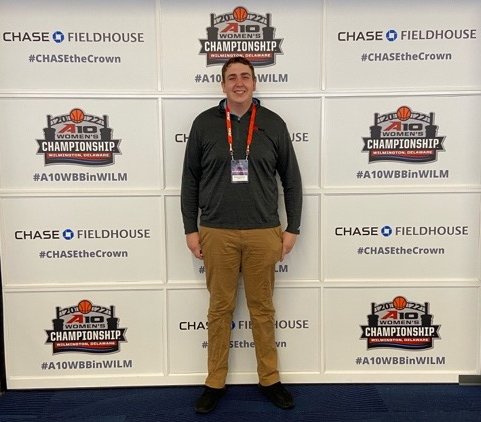 took the term March Madness, and made my March full of madness. I had gotten an email from my Sports Communication professor, Dave Howell, saying that the Atlantic 10 Conference was looking for volunteers to help out at its women’s basketball conference championship tournament. The timing of the tournament was perfect because it fell over spring break, so I was able to go down to Wilmington each day and not only get great professional experience, but catch some good basketball as well.

There I was not held to only one job. Throughout the days, I rotated through many jobs including helping in the press conferences, stat-running shadowing Director of Media Relations Jay Sullivan. I got to see the day-to-day operations of a Division I basketball conference firsthand.

My favorite part was when I got to go inside the CBS Sports production truck and see all the magic of what goes into a live sports production. I had read all about it in my Live Sports Production class, but to see it happen in person was surreal.

After the championship and press conferences on Sunday, while helping clean up, I overheard someone talking about the upcoming March Madness East Regionals being held in Philadelphia, and my ears perked up. The person talking about it happened to be the Director of Athletic Communications at Penn, Mike Mahoney. Penn was the host school to the East Regionals, so I had asked if they were looking for volunteers. One opportunity led to another. 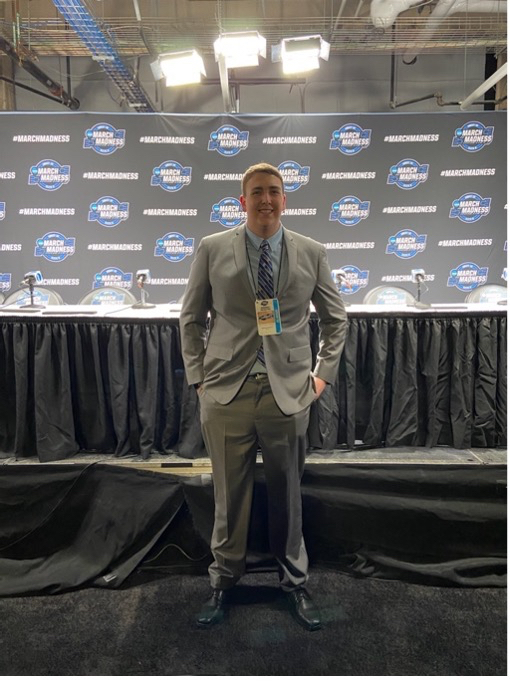 I got to volunteer at March Madness later that month. My job there was a little more limited, but I had no issues at all with that. I was tasked with being a microphone holder during the press conferences. This meant I would hand the microphone around to media members who wanted to ask a question to the student-athletes or coaches. To me, this was really cool because I hope to be one of the media members in the seats one day, asking the questions.

During the games themselves, I had an All-Access pass to the Wells Fargo Center. I watched all the games from right below the basket, just one row back from all the action. The atmosphere in the building was so much fun because we were all getting to witness history firsthand in the Cinderella run from St. Peter’s.

One of the best parts of both experiences was the networking opportunities I got. One person I met in Wilmington was Atlantic 10 Commissioner Bernadette McGlade. She was also at March Madness and recognized me and we had a nice conversation. It really meant a lot to me to know that I made such an impact that she remembered me weeks later. I also got to meet one of my childhood idols, Philadelphia Phillies play-by-play announcer Tom McCarthy. I did not know that Tom was there to call the games for Westwood One radio. I was talking with a couple of people and Tom walked out and my eyes lit up. I was starstruck. That Saturday, I made it a point to make sure that I had introduced myself to McCarthy, because as an aspiring broadcaster, you never know when he may come in handy.

While at Cabrini, I have been heavily involved in student media as both the Managing Editor of the Loquitur and Sports Director for Cavalier Radio. These positions are prepping me to be one of the media members working one of these tournaments. It is surreal to me that I get to do the same things the reporters and broadcasters do, just as a junior at Cabrini.

At the end of it all, this was one of the best months in my life. I know if I got to go back in time and meet my childhood self, the younger version of me would not believe all the incredible opportunities I have gotten just as a college junior.

If my story tells you anything, take whatever opportunities that you can. One experience can lead to endless possibilities and you never know what can come out of it.