The Class of 2025 enjoyed its first moments on campus together on Friday, August 27, as students and their families didn’t let the heat, humidity, or rain hold them back from earnestly participating in the Move-In Day festivities that kicked off the fall 2021 semester.

“I am so proud to officially welcome you to Cabrini University,” said Provost and Vice President of Academic Affairs, Chioma Ugochukwu, PhD, during Friday’s Matriculation Ceremony. “While this is an academic ceremony, we think of it as a welcoming celebration. Today, you become Cavaliers!”

After students met the Deans from their respective schools of study—Beverly Bryde, EdD, School of Education; Timothy K. Mantz, DBA, School of Business and Professional Studies; and Richard Thompson, PhD, School of Arts and Sciences—Cabrini’s newest undergraduate students completed the Matriculation Ceremony by signing a commitment to Cabrini’s Core Values and listing their names in student registries.

Throughout the morning, Orientation Leaders and other volunteers eagerly awaited first-year students and their families outside each of the first-year residence halls, helping students move their belongings into their new campus homes. Similar to Move-In Day 2020, Cabrini offered an early drop-off option to streamline the process and limit crowding in residence halls.

“The spirit is good,” said Sister Christine Baltas, MSC (ʼ66), Campus Ministry Associate, who greeted families as they arrived outside Woodcrest Hall. “The kids are great, the Orientation Leaders are enthusiastic and want to help people.”

“We have to do things differently moving in, but the students are just the same,” she said. “I’m really excited to start a new chapter.”

A fresh start was on the minds of many new students and their families as the University embarked on its first primarily in-person semester since mid-March 2020.

“I think it will be good for everyone to have that connection again,” said former Alumni Board Vice President John Gwiazdowski (ʼ99) of in-person classes as he helped his son Gage Gwiazdowski (ʼ25) move into his residence hall. “He’s excited to be around people and be in a classroom.”

Gage, an Exercise Science and Health Promotion major who aspires to start a wrestling club on campus, said it was a “special” experience moving in at Cabrini, where he’d been visiting for lacrosse games and other events since his youth.

“I’m excited to be here, especially with the history my family has had here,” Gage said. “Within my major program, I’ll be doing something that I really want to do.” 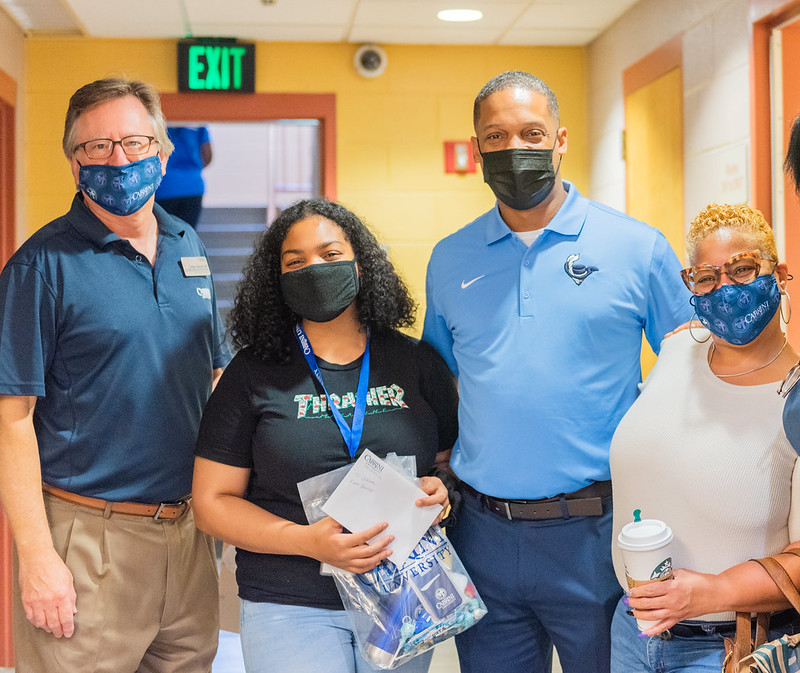 Desiree Lacey Harmon (ʼ99), an Alumni Board member, said she was “thrilled” when her daughter, Dakota Tee, chose to follow in her footsteps and attend Cabrini. Harmon believes that her daughter and the rest of the Class of 2025 have come to the right place to grow into well-rounded citizens.

“This was a place for me where I really got to stretch my wings … and try some things out in a safe environment,” Harmon said. “Our world is a bit crazy right now, and I think it’s great that our students have a contained place where people know who they are and they can develop mentally … with people who are here to support them.

“That is, to me, part of the Cabrini experience. You get to try things out and realize who you’re going to become and the trajectory you’re going to take in your future.”