What It Was Like Leading A Service Trip to NOLA

This spring break I was the leader of Campus Ministry's New Orleans service trip. We spent six whole days in NOLA and the other two were our travel days. For the first two days, we did not work or do any service. These days were our "free" days when we got to immerse ourselves into the culture. This year we were down there during Mardi Gras which was a fun experience. The other four days we were volunteering either at the camp, where we were staying or at St. Bernard Project (SBP).

During our two free days, which were Sunday and Monday, we went to church at Our Lady of Guadalupe, went to the Presbytere museum, got to explore the French Quarter, and visited Cabrini High School.

On Sunday, we went to church and it was beautiful. Everyone there was extremely welcoming and friendly. After church we went to the museum which gave history on the natural disasters that happened and the history of NOLA's culture. On the first floor, we learned about what happened to NOLA during the Hurricane and got to watch people tell their stories and give first-hand accounts to what they went through. The first floor also had diary pages on the wall so we could read about what someone was going through during those horrific times. Upstairs gave history about the culture down in NOLA and history about Mardi Gras, the parades, the costumes and more. After the museum, we split into smaller groups and got to explore the city.

Four friends and I went to Dat Dog to get lunch and then we went to Café du Monde to try the famous beignets. After we ate we stopped to watch a street show which was amazing. The rest of the day we just walked through the French Quarter, bought souvenirs and took a lot of pictures. On Monday we went to Cabrini High School and even though it was closed for Mardi Gras one of the Sister's was kind enough to give us a tour. We learned more about Mother Cabrini and got to see her personal items such as her bed and dressers. It was a great experience.

Tuesday we helped the people at Camp Hope, which was the camp we were staying at, fold shirts for their store and make bagels for the next group that was visiting. Camp Hope makes all the food from scratch, which is run by a husband and wife, and they are hosting a group of 250 soon so we were able to help them. After we finished doing that the rest of the day was ours. We took a trip down to the levees to see where they broke. It was crazy to see because we talk about it but it was different standing there and seeing them in person.

Then the rest of the week we went to the volunteer site that SBP sent us to. We worked on one house where we painted and put in the flooring. We had a lot of fun working together and learning life skills that will help us throughout our lives. The AmeriCorp members that lead us through the week were the best and really helped make our experience there a good one! 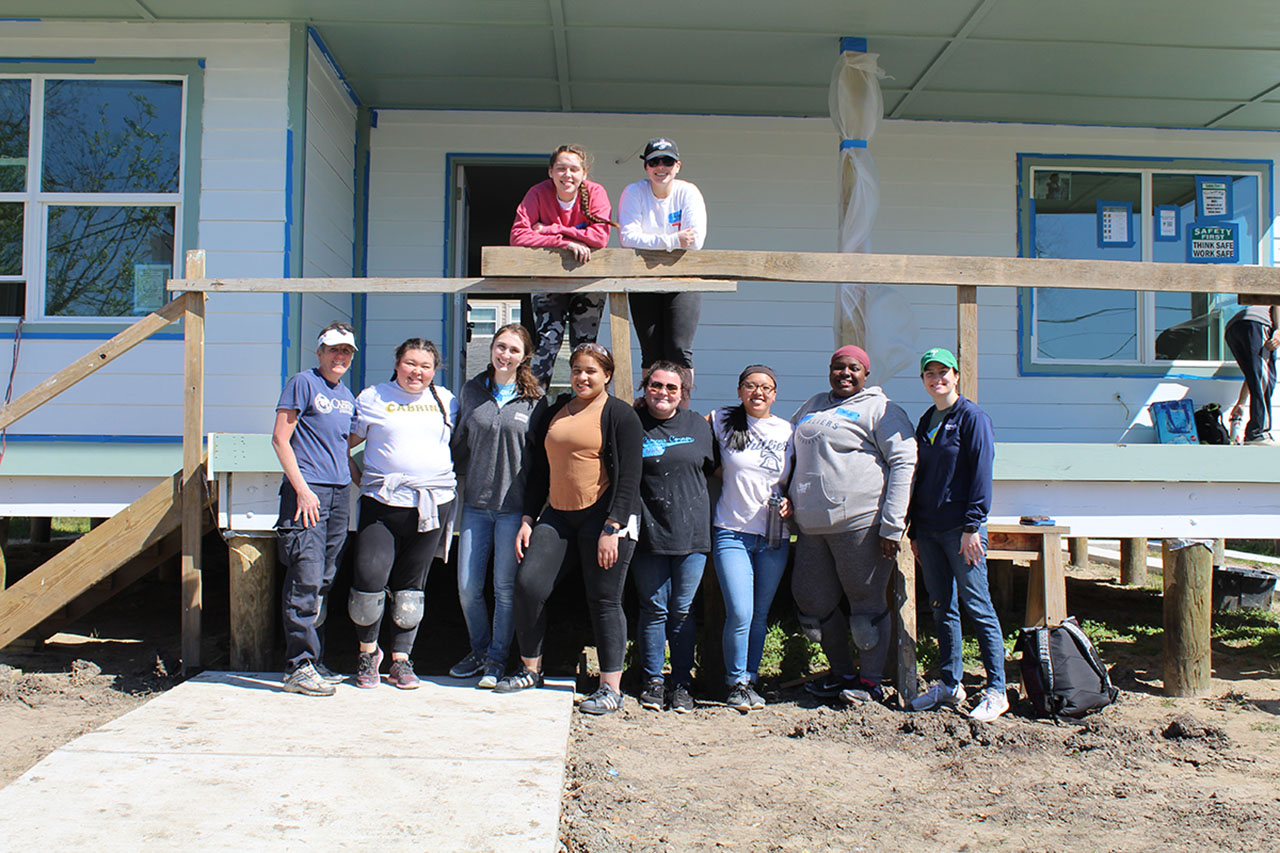 If you ever have a chance to go on a mission trip through Cabrini I highly recommend it. Not only are you doing service but you get to know people you normally would not. The week was full of bonding. We went to NOLA only knowing a couple of people and left knowing everyone. It is a great experience and I encourage anyone who can go.

As the leader I held a reflection every night to get everyone thinking about what we were doing in NOLA and to open up. Nothing is better than going on a trip and leaving with friendships you never thought you would have.

Leading was different than going just as a student but it was just as rewarding. Months before we left I set up meetings with the girls who were going to give them everything they needed to know. As the leader, I just wanted to make sure everyone was having the best experience they could while we were in NOLA. Being the leader for a mission or immersion trip is a lot of responsibility but watching how everything falls into place is beautiful. I had the best time this spring break and I hope the group that I was with did as well.