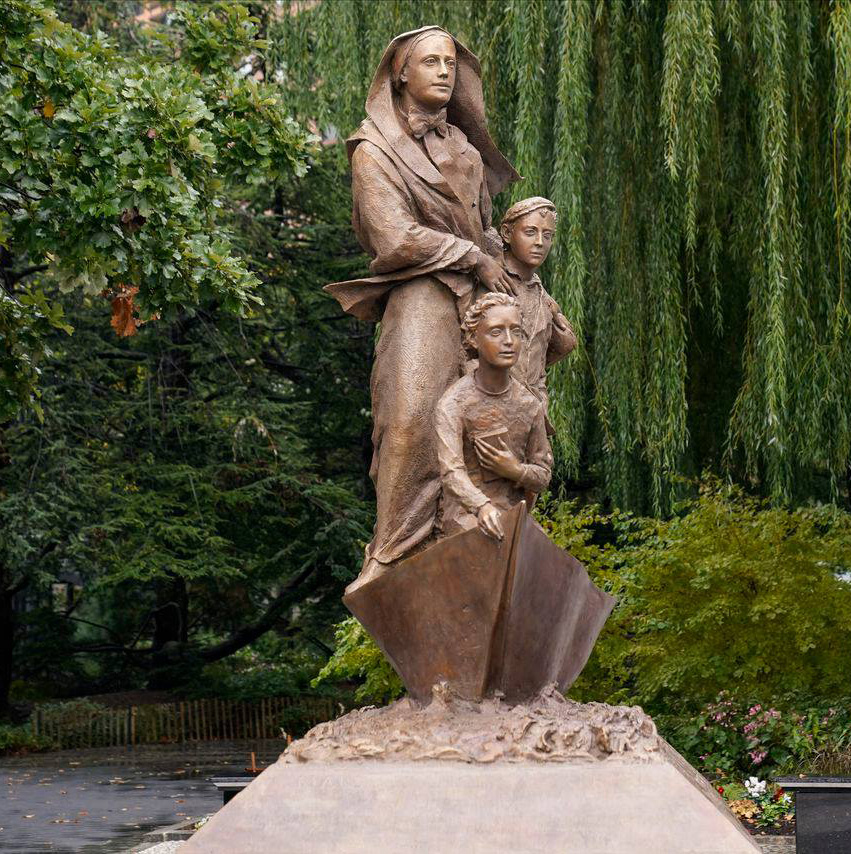 New York State unveiled a statue of Saint Frances Xavier Cabrini, Cabrini University’s namesake, on Monday, Oct. 12 in Battery Park City. Erected less than 100 yards from the harbor containing the Statue of Liberty and Ellis Island, the statue depicts Mother Cabrini, patron saint of immigrants, in a boat with two children, looking forward through rough seas. The girl is grasping a book as a symbol of Mother Cabrini’s commitment to educating children, and the boy is holding luggage and an ocarina, a wind instrument, to represent the music and culture immigrants have brought to America.

The statue was revealed on Columbus Day, when New York City traditionally hosts a parade as a part of Italian Heritage Month. Though the parade was canceled due to the COVID-19 pandemic, honoring Mother Cabrini is a fitting way to celebrate the contributions of Italian Americans to the country, said Ray Ward, PhD, Director of Cabrini University’s Wolfington Center.

“Mother Cabrini was an Italian who became a naturalized American citizen and set up institutions that contributed to the prosperity of this country,” Ward said, pointing out that Mother Cabrini’s service in love, entrepreneurship, and cultural pride and integration were her most celebrated attributes.

Born in 1850, she arrived in the United States in 1889 after founding the Missionary Sisters of the Sacred Heart, an order that served and schooled orphans. During her lifetime, she founded 67 orphanages, schools, and hospitals in New York and around the world. She died in 1917.

Mother Cabrini’s remains rest at the altar of the St. Frances Cabrini Shrine in upper Manhattan, a property she purchased in 1899 and later used to establish a school for girls.

Photos courtesy of the Missionary Sisters of the Sacred Heart of Jesus.