Cabrini’s Criminal Justice Reform and Beyond virtual panel convened influential perspectives from various sides of the American criminal justice system on Thursday, Oct. 29, including law enforcement, litigation, advocacy and social work. Moderated by Vivian C. Smith, PhD, Chair and Associate Professor of Criminology, and Bethany Van Brown, PhD, Assistant Professor of Criminology, the panel provided a nuanced discussion on the aspects of the criminal justice system most in need of reform. 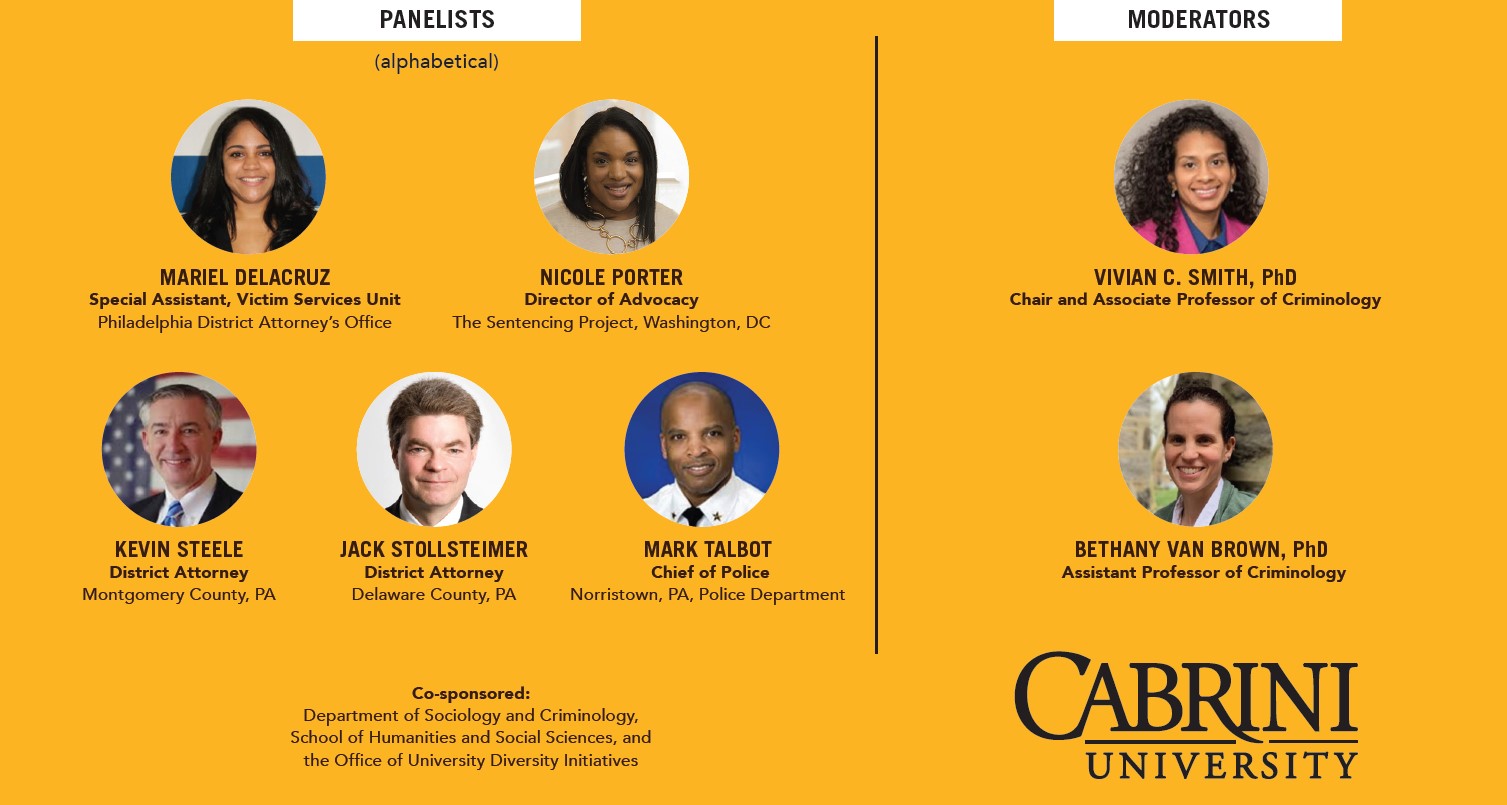 To begin, Smith asked each commentator to explain what criminal justice reform looks like from their perspectives.

Mariel Delacruz (ʼ16), Special Assistant, Victim Services Unit, Philadelphia District Attorney’s Office: “To me, it means fixing a system that has been historically known to impact Black and brown communities and affect people who have caused harm and people who have been harmed.”

Nicole Porter, Director of Advocacy, The Sentencing Project, Washington, DC: “Criminal justice reform should focus on decreasing the amount of people in the criminal justice system and work to repair the harm done to Americans over the past 40 or 50 years.”

Kevin Steele, District Attorney, Montgomery County, PA: “When you’re doing something that way because you always have done it that way, that’s not OK. Criminal justice reform means having a criminal justice system where a majority of our citizens think they are going to get fair trials.”

Jack Stollsteimer, District Attorney, Delaware County, PA: “We represent everyone in the system as prosecutors, so I try to look at this individually. How are we smart on crime but also smart on reform?”

Mark Talbot, Chief of Police, Norristown, PA, Police Department: “This isn’t about differing perspectives. There’s an objective reality that we have to face. The criminal justice system has never cared about the outcomes. Only the process. And, it has hurt our communities.”

Acknowledging the Oct. 26 police killing of Walter Wallace Jr—a Black man experiencing a mental health episode in West Philadelphia—Smith asked the panelists to weigh in on reform that addresses racial disparities and mental health rehabilitation in the criminal justice system.

“We’re in a moment of time when there’s been a spotlight on how Black people are treated,” Steele said. “We have to try to make this equal: equal justice under the law…But, we’re not even close right now.”

Stollsteimer said some of the work involving racial bias training in law enforcement was under way in his county as well as in neighboring Montgomery County. Smith is part of the racial bias task force working with police departments in these counties, and Talbot said that the Norristown Police Department’s bias training has been in place for years.

“These are changes that should have happened a long time ago,” he said, adding that he is skeptical about the efficacy of such measures. “The system that keeps the bias is still in place. You watch the news and see a link between dark skin and bad stuff. The criminal justice system is always going to fail in a racist society.”

Delacruz brought a unique perspective to the discussion, as her work in Philadelphia’s Victim Services Unit often puts her on the “opposite side” of the criminal justice reform, she said.

“Ask the people going through the system what reform looks like,” Delacruz said, pointing out that people of color account for a disproportionate amount of the victims in the criminal justice system. She noted that some victims say they wish those that harmed them had better access to mental health care and rehabilitation.

Porter said that victims’ perspectives are important to consider when discussing sentencing reform in particular. She asked what could be reformed so that criminals are “held accountable for their crimes but also so they can improve the circumstances that led to their imprisonment.” She encouraged the audience to consider alternatives to lifelong prison sentences (50 years or more), which have skyrocketed in frequency since 1970.

Stollsteimer agreed that mental health remains one of the biggest challenges in criminal justice reform.

“People keep coming back because we don’t have the capacity to help them,” he said of incarcerated people with mental health issues. “They end up continually coming into the system.”

In Montgomery County, Steele said his community task forces have been exploring reforms to various processes, including the cash bail system, and that he has seen a recent, fundamental shift in community policing strategies.

“When I came into this 25 years ago, I saw this system as a law and order approach,” Steele said, referring to the traditional procedure that goes from arrest to prosecution and sentencing before moving on to the next case. “That’s not how I see it now,” he said, referring to rooting out the causes of crime—like poverty—instead of just solving the crime itself.

When Van Brown asked the panelists to reflect on when they will know that enough reform has been done, most of them agreed that there would likely always be some reason for reform in the criminal justice system.

“I’ve been in government a long time, and I don’t know if there’s ever enough reform,” Stollsteimer said. “Government agencies don’t have the same private sector pressure to adjust with the current world.”

Talbot said that advocates for reform should always be willing to evaluate which tactics and policies are proven to work before attempting to overhaul the entire system.

“Reform doesn’t end at a hard stop,” Delacruz said. “It has to keep going because there are always going to be new issues.”