To call Trustee Emerita Joan Buzzallino (’66) a trailblazer is not an understatement.

An Elementary Education major at Cabrini, Buzzallino would go on to become one of the first women in the IBM sales organization in the 1970s. She joined the company as an Educational Support Representative in New York, NY, after teaching on Long Island for a few years, and soon moved on to positions as Marketing Manager in Philadelphia, and later, Branch Manager in Morristown, NJ. After 15 years in sales, she transitioned to Human Resources.

Buzzallino, a champion of employee management and executive development, quickly ascended the ranks, eventually becoming Vice President for Human Resources, Manufacturing and Sales, the unit responsible for IBM’s 190,000 engineers and scientists. During her tenure, Buzzallino was a leader in succession planning and a strong advocate for diversity and inclusivity. She retired from the company in 2005.

Since then, Buzzallino has remained connected to the company as an active participant in its On Demand Community, an initiative at the core of IBM’s support for volunteerism around the world.

Cabrini, where she served on the Board of Trustees for 12 years, from 2003 to 2016 (with a gap year in between terms). Two areas that especially benefitted from her influence were the Executive Compensation Committee and Board Committee Restructure Task Force. She chaired the Executive Compensation Committee for several years, guiding the process of Cabinet-level hiring and compensation, researching compensation benchmarks, and establishing a framework for presidential evaluation. Her leadership as Co-Chair of the Board Committee Restructure Task Force, which evaluated and restructured the board committees in 2015, resulted in streamlined board committees and alignment with the Association of Governing Board’s best practices.

The Cabrini community has also been the recipient of Buzzallino’s generous philanthropy. In 2005, she endowed the Buzzallino Family Faculty Fund at Cabrini, which recognizes and rewards faculty members who are dedicated to academic excellence and outstanding undergraduate teaching and who carry out the vision and spirit of Mother Cabrini on a daily basis. For students, she established the Buzzallino International Experience Fund, a scholarship that provides a for-credit global experience to an individual who otherwise couldn’t afford it, with preference given to a minority student. The first scholarship was awarded in the 2011–12 academic year. On the occasion of her 50th reunion in 2016, she and her classmates created the Class of 1966 Scholarship, supporting female students that embody the charism of their class.

Cabrini honored Buzzallino in 2001 with the Distinguished Achievement Award for noteworthy career achievements that embody Cabrini’s mission of leadership development and commitment to social justice and academic excellence. In 2013, Buzzallino received the Ivy Young Willis Award for her outstanding contributions in the field of public affairs.

Today, Cabrini again pays tribute to Buzzallino—a trailblazer for women in business and a loyal alumna who believes in the value of higher education for all deserving students—with the 2019 Christopher Award for Extraordinary Leadership. 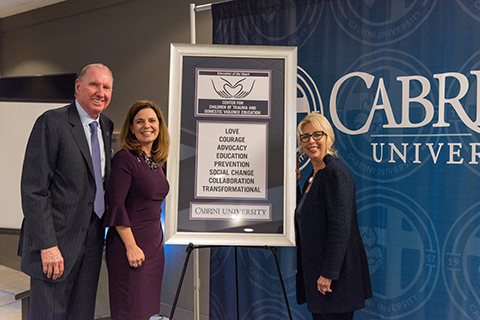 John Jordan, Colleen Lelli, EdD ('95), and Barbara Jordan (HON'08) at the launch of the Barbara and John Jordan Center for Children of Trauma and Domestic Violence Education

The Jordans were integral in starting Cabrini’s work with domestic violence education, and continue to work with Cabrini’s efforts through their passion, vision, and philanthropy.

“They have really pushed us to do this work that is so integrated with the work of the Missionary Sisters of the Sacred Heart of Jesus,” Taylor said.

“It’s because of [the Jordans’] commitment for advocating to make societal changes about domestic violence and the effects it can have on children that we have been able to provide programming, deliver professional development, and travel nationally and internationally to conferences,” said Colleen Lelli, EdD (’95), Associate Professor of Education and Director of the Center. Lelli also credited the successful integration of domestic violence education at Cabrini to faculty members who have taught the subject to students, collaborated with community partners, and conducted research.

2017 Recipients: The Missionary Sisters of the Sacred Heart of Jesus 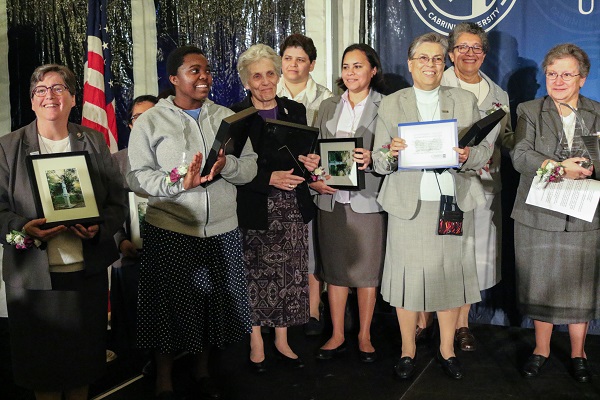 Founded by Cabrini’s namesake, Saint Frances Xavier Cabrini, the Missionary Sisters of the Sacred Heart of Jesus (MSCs) order is an international missionary congregation of women present on six continents and in 17 countries of the world that carries on the apostolic work of Saint Cabrini.

The MSCs have truly served as the foundation of the institution, from our founding by Sister Ursula Infante to the MSCs’ charism helping us form our mission of providing an Education of the Heart and defining our core values.

Today, the MSCs, their lay collaborators, and volunteers work as teachers, nurses, social workers, administrators, and members of institutional boards of trustees, serving a common mission built upon the words of Mother Cabrini: to be “bearers of the love of Christ to the world.” 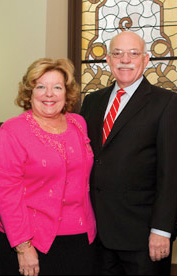 Cabrini University recognizes the amazing energy and life-changing impact of longtime Cabrini supporters Joanne Kovacs Balshi (’69) and Thomas Balshi, DDS, FACP (HON’10). Both have been strong supporters of the Cabrini mission through several philanthropic endeavors, including the establishment and support of the 3+4 dentistry track partnership between Cabrini University and Temple University.

The Balshis work closely together in restorative and reconstructive dental procedures, in 1999 creating their own foundation (Pi Foundation) that provides specialized care to patients, often from other countries, who are incapable of paying for specialized dental services.

Carl Driscoll, DMD, FACP, President of the American College of Prosthodontists and Director of the Prosthodontic Graduate Program at the University of Maryland, described the award as a recognition for lifetime achievement, noting that Dr. Balshi “epitomized the description of the Dan Gordon Award.”

Dr. Balshi’s 40 years of dental medicinal experience includes graduate and post-graduate degrees from Temple University School of Dentistry and prosthetic implant training at both the University of Toronto and the Institute for Applied Biotechnology in Gothenburg, Sweden.

Dr. Balshi has international experience in various locations such as the Royal Academy of Medicine in London and world congresses in Paris, Munich, Bologna, Athens, New Delhi, and Sydney, as well as in many cities in both North and South America.

Considered an expert in dental implant prosthodontics, Dr. Balshi’s trademarked Teeth in a Day protocol has served patients from around the globe. A diplomat of the American Board of Prosthodontics as well as a member of numerous other professional organizations, Dr. Balshi has authored numerous scientific articles published in professional journals and has co-authored the handbook A Patient’s Guide to Dental Implants. In addition to his scientific awards, he holds a United States Army Medal of Commendation and a Freedom Foundation George Washington Medal of Honor, and has been recognized in the Congressional Record of the United States of America.

Joanne has been a board member of Montgomery Hospital and chair of Montgomery Health Foundation. Founder of B&B Medical Marketing, she has written scores of patient education brochures and served in editorial capacity for social, religious, and healthcare newsletters.

She enjoys reading and writing poetry, has authored the book Smile Your Heart Out, and has an interest in 18th-century art, literature, and furnishings.

The Balshis have one daughter and two sons.

Robert L. D’Anjolell Sr. (HON’08)
President of D’Anjolell Memorial Homes, D’Anjolell was a member of the College’s Board of Trustees for more than 25 years.

Edith Robb Dixon (HON’80, P’85)
Dixon has supported the College for many years, and served as Chair of the College’s Board of Trustees.

She was named trustee emerita in 1999.

Margaret Hamilton Duprey (’73, HON’08)
Eight years after graduating from Cabrini, Duprey joined the Board of Trustees.

The Haverford Trust Company and Connell served as lead sponsor of the Cabrini Classic for many years.

He served on the Board of Trustees for three consecutive terms.

A generous supporter of Cabrini, Nerney served on the Board of Trustees for many years, with his most recent tenure from 2010 to 2015.

Robert Pucci
For 11 years, Pucci was President and CEO of the Main Line Chamber of Commerce, based in Wayne, Pa.

He serves Cabrini on the Board of Trustees and is a generous supporter of Cabrini.