You know those people who always knew what University they wanted to attend since birth? The same people who work throughout their entire high school career just to get into that one coveted school? Yeah ... that wasn’t me. I always knew that I wanted to go to college but I didn’t have a particular school in mind until the last minute. Like, literally the last minute.

Flashback to the year 2015. I remember getting into all of the schools I applied for and not solidifying my pick until about a week before I had to make the decision. Despite choosing Cabrini as my new school, I wasn’t exactly sold on it yet. I knew what major I was going to declare before even stepping foot on campus. I knew I wanted to be a Digital Communication and Social Media major, not because I knew what I wanted to do with it, but simply because it sounded cool. 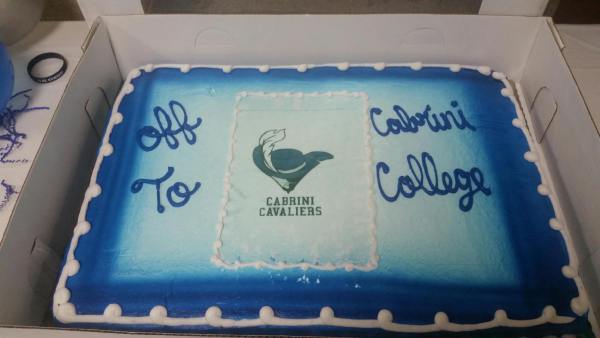 I didn’t attend Accepted Students Day but I was in attendance for Cabrini’s Summer BBQ. This was the first chance that I had to see Cabrini and it was a nice small school, something that I was definitely looking for. I was able to tour the dorms and the campus and it was OK to me; it wasn’t something that I fell in love with. Then again, I didn’t see the point of being in love with it since it was just a school. Just a place I would be getting my education from, nothing more, at the time.

Once freshman orientation weekend came around I was happy to be here and enjoying all of the festivities, but it still didn’t feel like home to me, just a school I attended. This feeling lasted for a while. All I did was just attend class and stay in my single. I remember not making a single friend in my first semester. In fact, it wasn’t until my second semester in video production where I met people that I would consider friends. The next year, my sophomore year, is when I finally branched out a little bit. I joined the Black Student Union, wrote for the school newspaper, and had a lot more friends. Despite all of that I still felt like Cabrini was just a school. I didn’t have that feeling that I belonged here just yet.

When I first came to Cabrini I started my own YouTube channel. On my channel, I usually post comedy skits and things of that nature. It was something that I was very passionate about but also something I wasn’t something that I was very vocal about. During the spring semester of my sophomore year, I received the opportunity to write an article about anything of my choosing since I was in the Perspectives section for this particular week. I chose to write about how to handle being a YouTuber and a college student since that was what I was going through. After writing and submitting my article, the response that I received was something I could have never expected.

Tons of people responded positively to my article and supported my passion, even professors. That right there is the exact 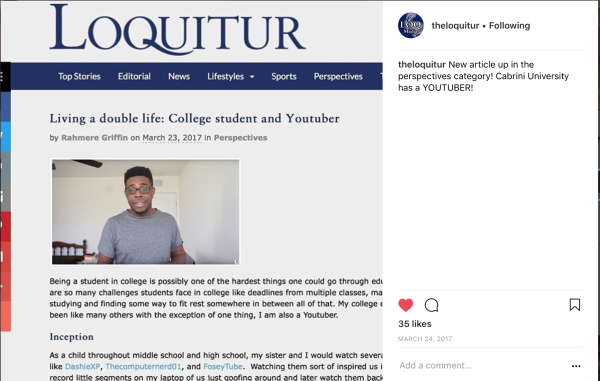 moment where I realized that I belonged here. When I realized that professors support and actually care about their students' passions. That truly means a lot and it was my defining moment here at Cabrini.

Now I still have professors asking me how my channel is doing, some even offer advice for me to grow and even recommend me for different opportunities around campus. I went from not knowing where I belonged on this campus to Cabrini just feeling like a school for a long time, but now I know that I belong here. Now I know this is home.