Lindsay Anderson ’12 - Education of the Heart: “It’s Part of Who I Am”

It was spring break of her first year at Cabrini, and nothing had prepared Lindsay Anderson for the view she was seeing from the top of Kayford Mountain, in West Virginia’s coal country.

All around her, the graceful tree-covered peaks you associate with the Appalachian Mountains were gone, having been clear-cut and leveled by mining companies practicing mountaintop removal.

The process involves blasting away hundreds of feet of mountain to expose the coal seam below, and shoveling the residual “overburden,” as the former mountaintops are called, into surrounding valleys.

Mountaintop removal makes it much easier to harvest coal. It also alters ecosystems, destroys habitats, and damages water quality. A recent study published in the Journal of Community Health linked the procedure to tens of thousands of cases of cancer in the region. 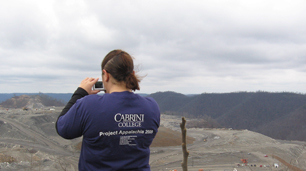 Anderson was in West Virginia with more than two dozen Cabrini classmates as part of an alternative spring break trip. While there they helped restore the home of a family of three, an older couple and their adult son, two of whom, she says, had cancer.

As she stood on Kayford Mountain there was an explosion from a mining operation in the distance, and a cloud of orange dust rose up and drifted over a community downwind.

“I learned to use power tools and I learned about poverty,” says Anderson, now a senior majoring in exercise science and health promotion. “It makes you think about things you have that others don’t. It was such a new experience for me.”

It was an experience that motivated her to get more involved in work for the common good. Later that spring, she joined Cabrini’s Community Service and Outreach Club, which organizes events on and off campus that support worthwhile causes.

She began to assume greater leadership with the club, and now, as its president, she’s helped put together a 9/11 Remembrance, a bingo night for residents of a low-income community, a 5K fundraiser for a women’s shelter, and many other events.

“Taking on a leadership role has helped me step outside my comfort zone,” she says. “I work with a wonderful team of people. I’m thrilled to be working with them to promote community service.”

Getting involved in community service has been a defining feature of Anderson’s Cabrini education. And when she graduates and enters the workplace, she expects to stay involved. “I want to,” she says.