Voted “Best Singer” and “Most Talented” in the 1985 yearbook, John Doyle (’85) has certainly followed through with his reputation.

After performing in 40 plays since grade school, Doyle began a theatre company with a friend while attending Villanova University for a master’s in theatre. The company developed into Iron Age Theatre in 1993.

As a new venture, the theatre needed a home. Conveniently, there was a huge interest in the arts in Norristown, Pa., at the time, and the Centre Theater opened its doors on Dekalb Street just when Iron Age entered the arts scene.

Co‑directors Doyle and Randall Wise jumped at the chance to become a resident company of the Centre Theater. They signed a contract with the new executive director, who just happened to be Doyle’s mother, Fran.

“It’s good working with my mom,” Doyle says. “There are challenges along the way, and there are times we ignore that we’re mother and son so it doesn’t get in the way of our work. But it’s actually pretty pleasant.”

The Iron Age Theatre and the Centre Theater have strengthened the Norristown community and economy during some difficult years, demonstrating how the arts contribute to the revitalization of a community.

“I feel like that relationship is one more thread in the weaved fabric of my life that encompasses Cabrini,” Doyle says about his involvement in Norristown, Cabrini’s partner city.

In return for using the Centre Theater’s space, Doyle serves as its artistic director, a role in which he promotes, negotiates, and schedules performances.

Doyle has directed or co‑directed every Iron Age production except for three in the theatre’s 20‑year history. Iron Age puts on six productions every year; two are collaborations with the Centre Theater.

“Iron Age is the umbrella under which I move toward my artistic goals,” Doyle says, listing Philadelphia’s FringeArts, Philly Urban Theatre Festival, and the theatrical experience knows as A Play, a Pie, and a Pint among the theater’s endeavors.

Though he directs almost every production, Doyle hasn’t performed since a production of “Man of La Mancha” in 2003. Now that he has worked with such a talented group of actors, Doyle says he’s not in the same league and finds that his talent shines behind the scenes.

“I wish I could get him back on stage, but he just wants to direct,” Fran counters.

One type of play that Doyle directs as part of Iron Age shares a common thread with Cabrini: social justice. Doyle worked with actor Bob Weick to develop a series of one‑man touring shows that explore the dignity of human beings, including immigration, equality, and voting rights. He markets these plays to colleges and local organizations.

“John has always had this focus on using education, using theatre, using these professional fields to enlighten audiences about what’s really important in the world,” says Jerry Zurek, Ph.D., chair and professor of communication at Cabrini.

Doyle graduated from Cabrini with a bachelor’s in English/communications and history, while minoring in philosophy and religion. As a student, he worked in the TV studio, wrote for The Loquitur, and served as photography editor for the yearbook.

He even played a role in the creation and distribution of an underground student newspaper, which was the satirical counterpart to The Loquitur. 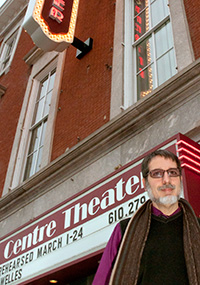 “I am a news freak much to Zurek’s credit,” Doyle says.

The professor influences Doyle to this day in his role as director of the Communications Center at Norristown Area School District (NASD), where he teaches television production and philosophy, and helps students produce programming for Norristown’s educational cable channel.

Doyle remembers how Zurek trusted students to do their job with producing The Loquitur, and he carries that teaching style into his work at NASD.

Now Doyle influences his students and also children who participate in the youth theatre, including the son and daughter of Cabrini’s Vice Provost and Dean for Academic Affairs Jeff Gingerich, Ph.D.

“John consistently stresses the importance of seeing art as a process and not a product, allowing kids to engage the arts in their own way rather than pressuring them to produce a polished artificial product,” Gingerich says. “He gives children the opportunity to maximize their creative selves.”

Between theatre work and his position at NASD, Doyle’s daily schedule is somewhat of a phenomenon. “The balance is really about not sleeping,” he says.

But every hour of sleep lost is worth it to Doyle. He is committed to giving back to his hometown community of Norristown, and to fostering a more just and caring society through theatre.