A group of 10 teacher assistants at Martin Luther School, a restorative practices school for children in need of emotional support in Plymouth Meeting, PA, is the first cohort of educators to participate in a new degree 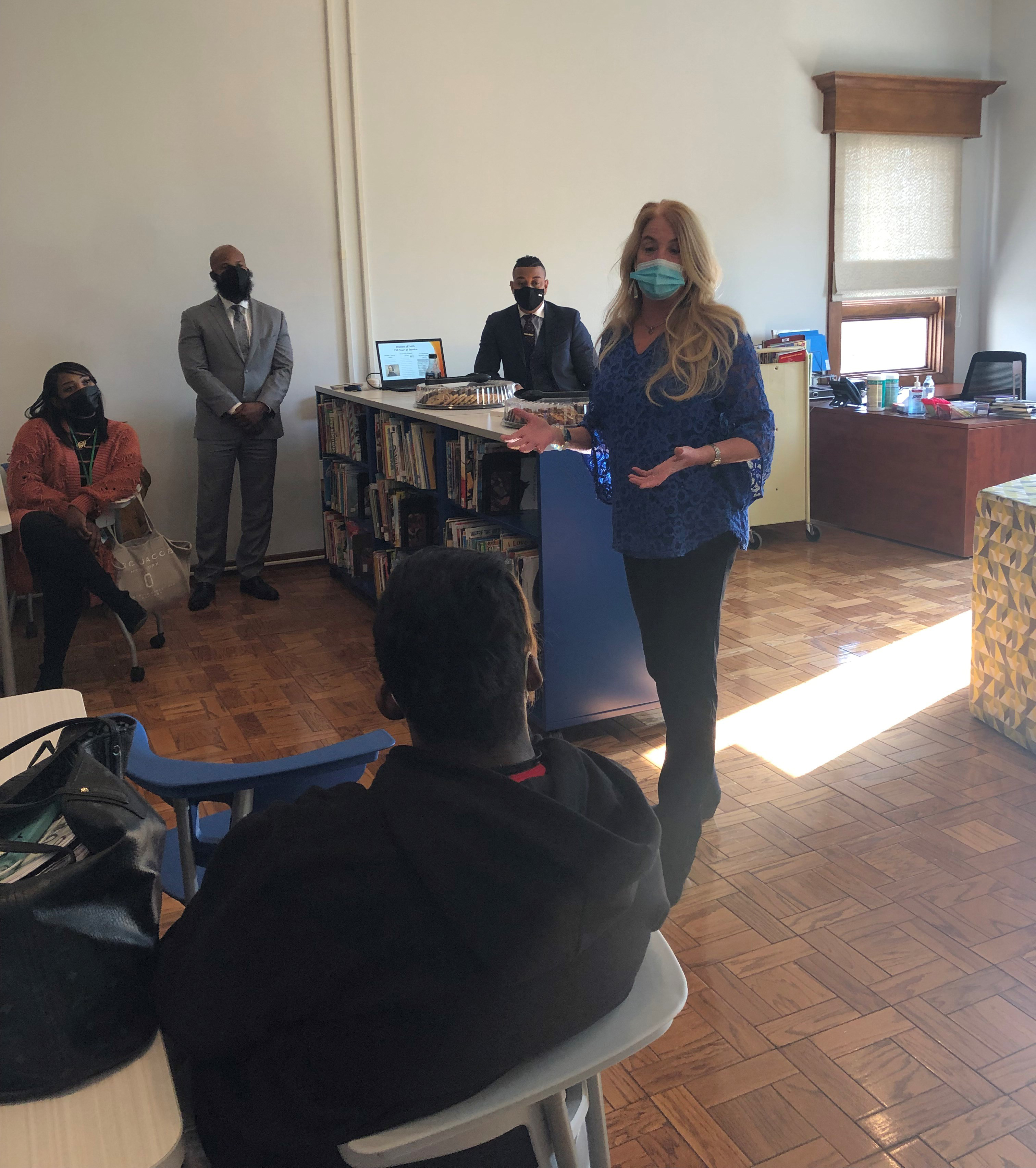 pathway program created by Cabrini’s School of Education. The program, which empowers these local educators through an accelerated Bachelor’s degree track, was announced on Monday, January 24, during a launch event at the school.

“We feel the work you’re doing is extraordinary,” said Beverly Bryde, EdD, Dean of Cabrini’s School of Education, addressing the program’s inaugural educator cohort. “We know that offering that emotional support to students can be harder than the actual content that we need to teach.”

The teacher assistants each introduced themselves to the group and explained how their respective career paths had led them to joining the program.

For Kenneth Walker, a Martin Luther teacher assistant, the degree program is an opportunity to get the Cabrini education he was set to pursue nearly 18 years ago, before life got in the way. Walker was accepted into Cabrini’s Early Childhood Education program after graduating high school in 2004, but was forced to delay his education when he became a father. He worked to raise his daughter while his girlfriend pursued a doctorate.

“Kids need diapers, so I kept working,” he said. “Fast forward years later, it’s my turn to go back to school. I was terrified of doing this, but…I looked at my two kids and I wanted them to be proud of me as much as they’re proud of their mom.”

Martin Luther School Principal Rafiq Williams offered his praise for the teacher assistants and hope for the future of the collaboration.

“We need a diverse education force, and you guys are going to prepare us for that,” Williams said to his school’s educators. “This is the first cohort and we hope there will be future cohorts for many years to come.”

In Pennsylvania, where less than five percent of educators were people of color in 2020, diversifying the teacher workforce has become a primary endeavor for education leaders, including those at Cabrini.

“Every educator in Pennsylvania needs to operate from a cultural lens,” said Ronald W. Whitaker II, EdD, Assistant Dean, Cabrini School of Education. “We need to think about what the possibilities are for communities that have been disenfranchised. School districts are looking for individuals who are coming out of school with that kind of mindset.” 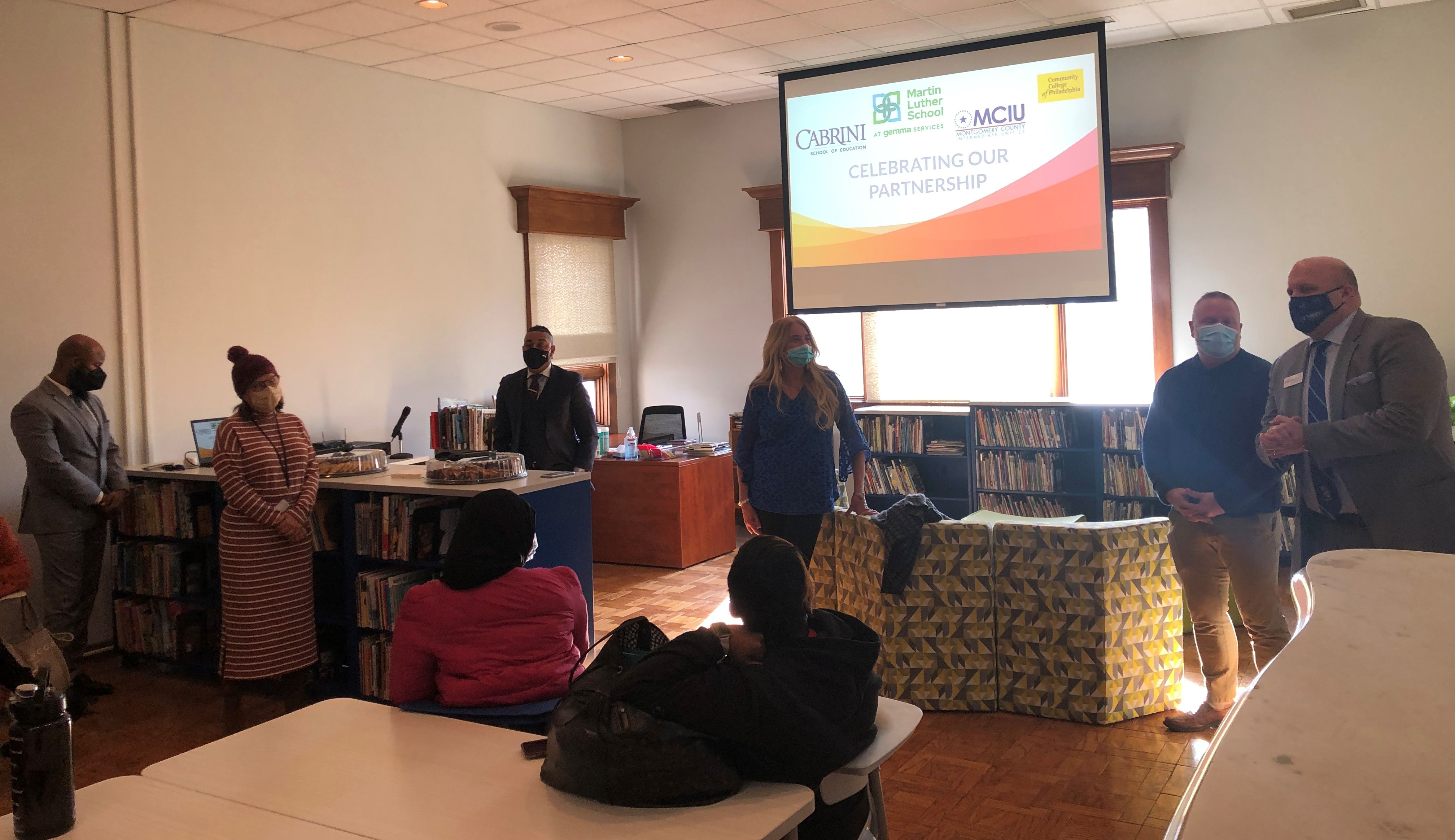 “As soon as life is getting in your way, reach out to us,” said Conway, emphasizing how Cabrini personnel, including advisors, are prepared to support the teacher assistants in their degree pursuits. “We will be there to advise you and walk you through.”

Gluckman helped connect School of Education leaders at his alma mater with those at Martin Luther School after a “lightbulb” moment during which he realized the two institutions were an ideal fit.

Williams, the Martin Luther Principal, said, “We’re glad it was Cabrini. With our history, it’s a great match.”

Both Cabrini University and Martin Luther School were founded according to the ideals and life’s work of 19th-century women of faith. The Cabrini community knows well its history as a college established by the Missionary Sisters of the Sacred Heart of Jesus Christ, a religious order founded by Mother Frances Xavier Cabrini in 1880. Martin Luther School, part of Gemma Services, evolved from a Philadelphia-area orphanage founded in 1859 by faith leader Elizabeth Schaeffer.

“This is a new evolution for the organization to now be crafting a program where people already working to serve the kids can increase their professional credentials,” said Joan Plump, Chief of Staff, Gemma Services.