Though Cavalier seniors will see their Cabrini undergraduate stories come to an end this week, the University’s 62nd Commencement exercises on Sunday, May 22, will mark a special beginning for Bushra Islam (ʼ22), who will enroll in Cabrini’s Global MBA program this fall.

(CCNYPA) upon standout students dedicated to community engagement and leadership—in recognition of her individual growth and campus leadership. The Fellowship empowers civically engaged students through training and education as well as networking opportunities.

A Business Management major and Human Resources Management minor, Islam has grown into a humble leader during her time at Cabrini. In the past two academic years, she led the Muslim Student Association, mobilized and organized a clothing drive for Afghan refugees, and outpaced her peers in volunteer service work.

“Our mission is entitled Education of the Heart, and Bushra lives out that mission every day,” said Cabrini President Donald B. Taylor, PhD, in a statement. “Cabrini University is proud of Bushra as a leader in civic engagement, and we look forward to seeing her life of service and social change blossom in the years to come.”

Though Islam will walk across the Commencement stage as one of this campus’s leaders, she was not always inclined to take charge among her classmates.

“Coming into Cabrini I was a shy student who just wanted to go to class and come home, and I became a student who wants to volunteer everywhere now and spend time to make connections,” she said.

Islam chose to volunteer her time strengthening the Cabrini community, despite commuting to campus during two pandemic-impacted school years. 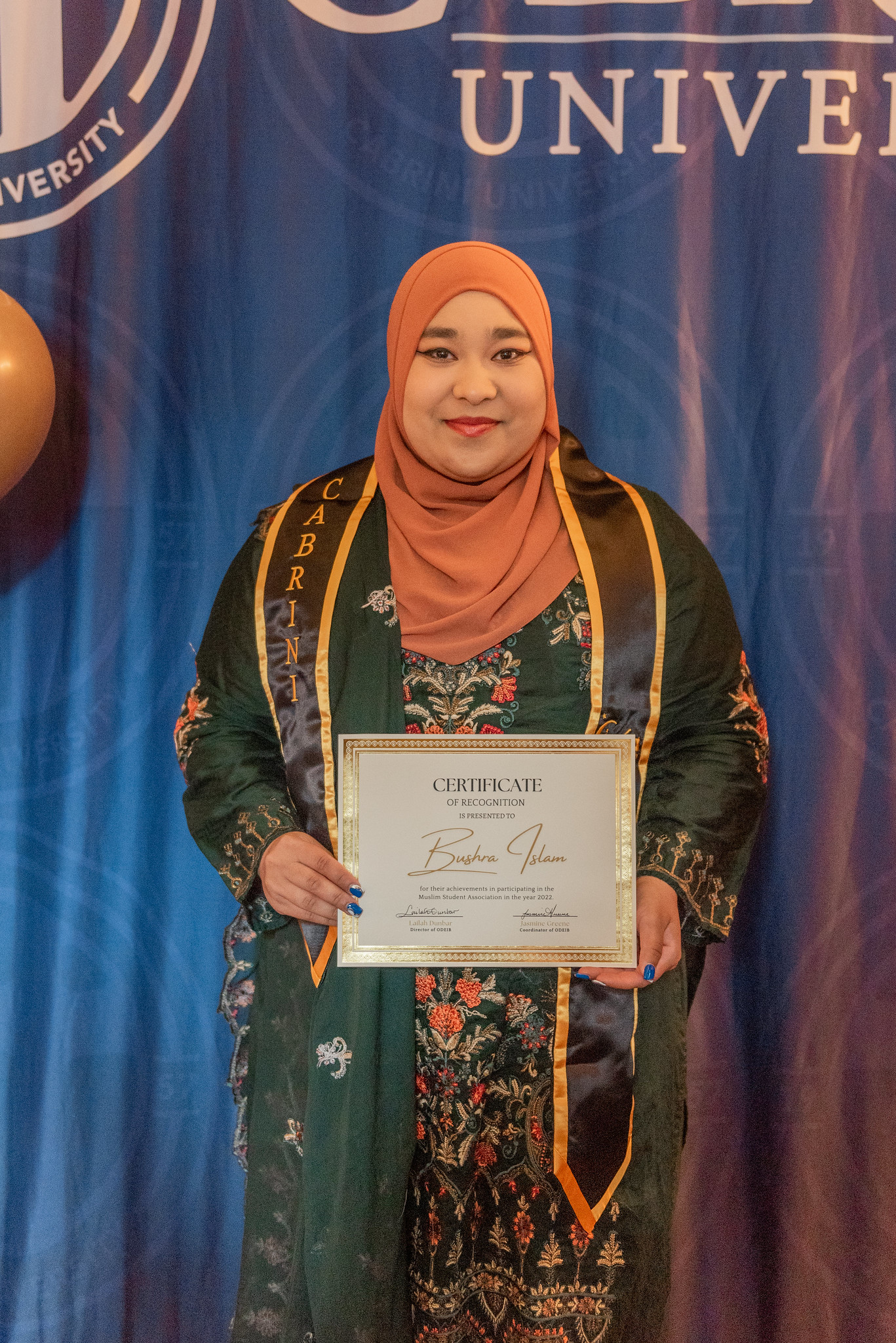 “Bushra could have very easily gone with fully online classes, and we would have never seen her over the past two years,” said Ray Ward, PhD, Director of the Wolfington Center where Islam has earned many of her volunteer hours. “But, she was looking for ways to get involved — ways to connect with people. She’s the kind of person who wants to fill her day…if she has a checklist where everything’s checked off, she’s going to put more things on there.”

A first-generation college student whose parents emigrated from Bangladesh in the 1990s, Islam credits her mother and Ward for pushing her to take on leadership roles and to keep her checklist stocked with meaningful work.

In December, Islam collaborated with leaders of several student clubs on campus to lead a clothing drive for refugees displaced from Afghanistan. After a six-week drive including tedious coordination throughout the Cabrini community, 20 boxes of clean clothing were donated and valuable lessons were learned.

“I got a first-hand look at what it means to be a leader, and how to fix problems when they arise,” Islam said.

In addition to organizing campus events like Hijab Day and an interfaith fasting discussion on behalf of the Muslim Student Association, Islam has tutored students in Norristown Area School District as a GearUP mentor. The tutoring work counts toward the 300 hours of service required by the Next Steps AmeriCorps program, in which Islam enrolled in January. While many of her AmeriCorps peers started the program four months earlier in August 2021, Islam is still slated to meet her service requirement before the year-long program concludes this August.

The Newman Civic Fellow and soon-to-be first-year Global MBA student also recently announced that she will be Cabrini’s Next Steps AmeriCorps Team Leader starting this August. Islam has said she hopes to learn from these unique opportunities and experiences.

“I hope to create connections, but not only just connections,” she said. “I hope to use this opportunity to gain experiences that I can take with me in my career.”