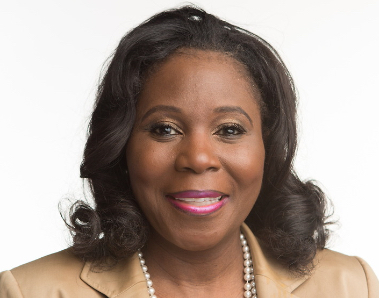 One of six Fellows from The Inquirer, Ousley is part of Lenfest’s effort to increase the number of people of color in leadership positions in newsrooms and endow them with formal training that they haven’t traditionally received.

“They’re teaching us about product development, budgets, revenue models—all these things that you just don’t learn,” she said.

“This program will start grooming and growing journalists of color to take on higher roles in their organizations.”

While the program’s launch comes at a time of nationwide unrest over racial discrimination, Ousley learned that Lenfest was planning the Constellation Initiative prior to the death of George Floyd.

“It was already on my radar,” she said. “This isn’t something that was thrown together in the aftermath of George Floyd. This is not that. What Lenfest is doing is really outstanding. The investment and return on investment are something that I look forward to seeing, and I hope that other news organizations will look at what Lenfest is doing and model it … so that we get more people of color to the table where decisions are made.

“The power of what Lenfest has done will truly be felt when the Fellows—especially the 30- and 40-somethings in the program—are in key roles at top news or other organizations across the country.”

Ousley was the only African American content editor in The Inquirer newsroom in November  2019, when she received the Impact Award from the Philadelphia Association of Black Journalists (PABJ). Since then, The Inquirer has hired more editors of color, and with the country’s nationwide racial turmoil, she says Black editors are “very much in demand.”

Ousley is a part of the team overseeing committees charged with removing bias and racism from The Inquirer’s coverage.

Calling the work “interesting” and “intense,” she says she likes being a “part of the conversation.”

John Martin, Assistant Managing Editor, News, at The Inquirer, sees Ousley as an excellent addition to the Constellation Initiative and the newsroom, noting that her desire and commitment to grow as an editor and a leader has impressed him.

“She’s not just a good editor,” he said, “she’s been a mentor and a sounding board for journalists across our newsroom, and strives to make sure our coverage reflects the voices and perspectives of the community at large.”

Ousley’s reporter instincts date back to her sophomore year at Cabrini, when Jerry Zurek, PhD, Professor of Communication, urged her to interview for a copyediting internship at The Inquirer. Fortuitously, she met with Pulitzer Prize-winning journalist Acel Moore, whom she told that she wanted to be a reporter, not a copyeditor. The man she would later refer to as “sort of like my fairy godfather” then arranged a reporting internship with the paper’s former Main Line Neighbors Bureau in Wayne near Cabrini.

She says Moore, who died in 2016, and Zurek made sure she kept her career on course from the beginning.

“Money could not buy the time, attention, and direction I got at Cabrini,” said Ousley, a former Loquitur editor.

Throughout a career covering schools, crime, politics, police, and education, she has proven her desire to tell the full story—and tell it accurately.

“From the time Yvette was a student-editor of Loquitur to now, she has followed an ethical compass to find and raise up the essential stories, injustices, and issues of our region and country,” said Zurek, who surprised her at the PABJ award ceremony this past November. “With dedication, daring, and compassion, she has become a journalism leader in Philadelphia.”

Ousley says she’s always enjoyed reporting the news because no day is ever the same.

“Journalism has never felt like work to me,” she said.