Alumna Explores Life with a Disability in Local Theater Debut

Local champion of the theater Becky Bradbeer (ʼ94) made her stage debut on Saturday, Dec. 5, starring in “Art House #1,” the premiere installment in a new pandemic-era virtual performance series from Theatre Horizon in Norristown, PA.

The production wove together a monologue about Bradbeer’s experience as a woman living with cerebral palsy and her love for theater, punctuated by planned interruptions in which esteemed actors within the Philadelphia theater community called Bradbeer to wish her luck with her performance. The final such “interruption” was a true surprise for Bradbeer, after her doorbell rang and she opened the door to see several Philadelphia stars of the stage singing on her lawn. Nearly 200 people tuned in to watch the virtual performance.

“We created this one-woman show that was clever, heartfelt, funny, and that was very powerful,” Bradbeer said.

Working with Theatre Horizon’s Artistic Director Nell Bang-Jensen and her team, Bradbeer said the production aimed to expand and enrich perceptions of people living with disabilities, while also exploring disability as an integral but overlooked part of diversity. Although the pandemic accelerated the rehearsal schedule, Bradbeer said the Theatre Horizon artistic team demonstrated true professionalism in preparing for the performance.

“I didn’t do this because I want to be a performer, I did this to hopefully broaden the scope of disability to anyone who was watching—to elevate the scope of what disability is,” Bradbeer said. “I’m not afraid of who I am—what I am. I’m very happy to be the one to help teach.”

The virtual nature of socializing during the COVID-19 pandemic has been a blessing in disguise, Bradbeer said, as she has been able to interact with more people than ever before.

Michelle Filling-Brown, PhD, Dean of the School of Humanities and Social Sciences and dear friend of Bradbeer’s, said, “It was a joy to watch Becky perform in this capacity because she is such a lover of the arts.

“Becky is such a light and inspiration, so it was great to see her on the screen instead of as an audience member,” Filling-Brown said. “Her monologue explored ideas of performance, independence, the gaze, disability, and the body.” 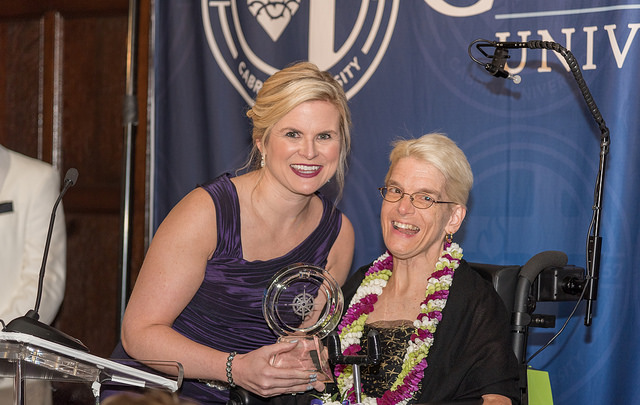 Bradbeer has been a strong supporter of Cabrini’s theater program and also spoke at the 2016 National Body Image Conference, a biannual symposium Filling-Brown started in 2014.

“We are so grateful for Becky's support of Cabrini's theater and were happy to celebrate her debut on the local ‘stage’—even if it was through Zoom!” Filling-Brown said.