“Tonight is about us working together to assure that all children, regardless of their race, ZIP code, gender, and other factors, have access to a quality education that will prepare them to compete in the 21st century,” Whitaker said. “Tonight is also about realizing that we’re never going to be free until all students in all schools can say that they are receiving equitable treatment.”

In his welcome, Cabrini President Donald B. Taylor, PhD, drew parallels between Mother Cabrini’s work as an urban educator in both U.S. and international cities and our work at Cabrini, acknowledging Whitaker, Campbell, and Dean of Education Beverly Bryde, EdD, for the strides that they have made in urban education.

“You had a vision and then you built momentum behind that. You’re making a real difference in the lives of children every single day,” Taylor said. “I can think of no more noble calling than that.”

“At Cabrini University, Shirley Dixon is a pioneer for our vision and our mission in urban education. Over 30 years ago, she started those courageous conversations on privilege and diversity,” Bryde said. “Shirley sat at lunch tables, classroom tables, and board tables to serve and lead others in these conversations. And Shirley would also stand up for what was right and just and continued to stand and speak out on issues of urban education, equity, and improvement.”

“[We are] standing on Shirley Dixon’s shoulders,” Campbell said. “She started those conversations before there was an inclusivity council, before it was popular to say ‘culturally relevant pedagogy.’ She’s a dynamic woman, with aspirational vision, and someone who I am most honored and humbled to recognize at this time.”

With a standing ovation, as a teary-eyed Dixon stepped up to accept her award—a glass globe to reflect her global impact—she said, “I’m speechless. It doesn’t come often, so enjoy it.” 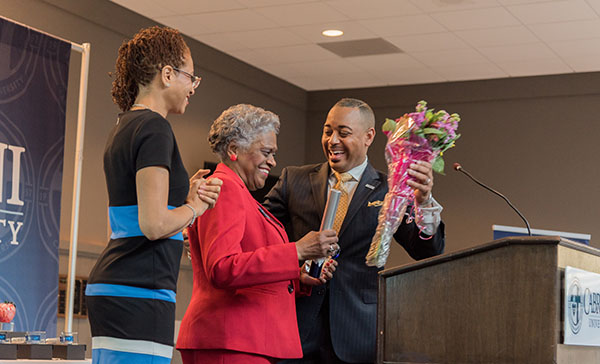 She thanked God and her family, many of whom were in the audience, and expressed her gratitude for the Cabrini community and the Missionary Sisters of the Sacred Heart of Jesus.

“I love Cabrini, and I love Sister Ursula for founding the institution,” she said. “It is the epitome of what an Education of the Heart is meant to be.”

Keynote speaker H. Richard Milner IV, PhD, a Professor at the University of Pittsburgh whose research examines practices and policies that support teacher success in urban schools, discussed national data on urban education and addressed the moral imperatives that educators and leaders need to assume in order to change the educational landscape.

“We need to focus on education, not school,” Milner said, naming that “first moral imperative.”

Milner’s second imperative—realizing that educators are working with students who are still developing—addresses how systemic punishment for students doesn’t help, but instead feeds the achievement gap because students lose instruction time during in-school and out-of-school suspensions.

“Moral imperative number three is that race still matters,” Milner said. “Sometimes racism shows up intentionally and other times racism shows up unintentionally. Teachers have great intentions. But there’s something called blind spots—implicit biases that manifest and show up in our practices, and if we don’t bring those to consciousness, then we do more harm than good.”

Teachers do a disservice to students by adhering to the mindset that they “don’t see race,” Milner said. “There are tensions between equity and equality, sameness. Race matters in the work we do. If we adopt colorblind ideologies in our work, we don’t recognize that there’s an overrepresentation of students of color in special education, an underrepresentation of people of color in gifted education, an over-referral of black, brown, and poor students to the [disciplinary] office, and an overwhelming number of African American and Latino students who are expelled and suspended.”

“Students’ sense of racial identity is strongly connected to their academic achievement,” Milner said. “When students feel strongly about their own racial and ethnic identity, they do better.”

Milner’s fourth moral imperative: When the music changes, so must the dance. “The context has shifted and so we have to make some shifts. Our task is to think about ways to connect the practices of students to school.” 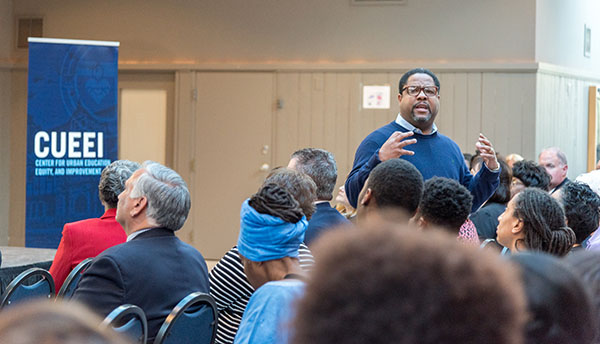 The fifth moral imperative Milner discussed is poverty and meritocracy. “Family income is the strongest predictor of who goes to college, not who’s the smartest. We’re not on a level playing field, and people come to the game at different points.

[As teachers] you sit in a space where you can open doors for others.”

His sixth imperative is that curriculum should count, both the explicit curriculum—the subject and material taught—and the implicit curriculum, which isn’t found in the course syllabi, but instead in smaller examples and interactions in the classroom.

Milner described his seventh imperative, to consider some radical practices, through examples in school districts around the country. In St. Louis, MO, washers and dryers were installed in schools after officials realized that students sometimes wouldn’t come to school because their clothes weren’t washed.

In his conclusion, Milner stated the many factors contributing to challenges in education and the perceived achievement gap.

“We really don’t have an achievement gap, what we have is an instruction gap, a caring gap, an effective leadership gap, a rigorous curriculum gap, a technology gap, a school counseling gap, a wealth and income gap, an employment opportunity gap, a resource gap, a housing policy gap, a health care gap, a quality childcare gap, a school and pop culture gap, and an opportunity gap.

After Milner’s speech, the Center for Urban Education, Equity, and Improvement presented the following awards: 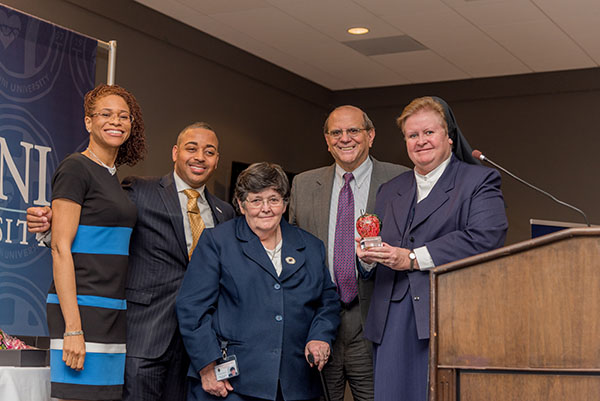