History in the Making: Cabrini's First Commencement as a University

History took place on Sunday, May 21, 2017, as 720 bachelor’s and master’s degree candidates became the first class to graduate from Cabrini University—in the institution’s 60th year—during the 57th annual Commencement exercises. 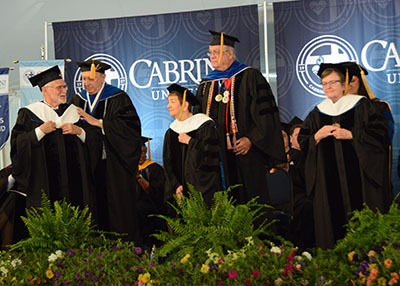 During the valedictory, Natalie L. Trerotola (’17) (pictured above with Interim Dean of the School of Natural Sciences and Allied Health Kim Boyd, PhD), a Pre-K–4 Education and Pre-K–8 Special Education major who achieved a 4.0 grade point average, said to her classmates, “Monday, August 26, 2013—the day I made the choice to walk through the front door of Founder’s Hall to begin my freshman year.  Class of 2017, it has been 1,364 days since that very first day. This is our day to celebrate our many accomplishments, struggles, and services to the world which have been molded by our choices. One-thousand, three-hundred, and sixty-four days later, we are here to celebrate the choices that we have made, which led each and every one of us to these very seats. Through our choices, we have been transformed over the past four years to become the successful young professionals that we are today.” 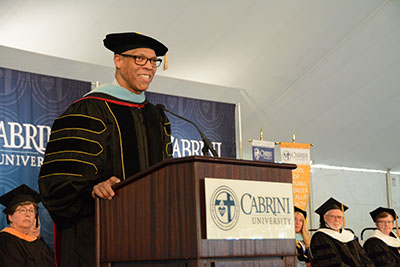 William R. Hite Jr., EdD, Superintendent of The School District of Philadelphia, delivered the Commencement address during the undergraduate ceremony.

Mentioning that it’s a tough and confusing time to be a young person trying to find his or her way, he encouraged the Class of 2017 to fight against injustices. “Fix what you see and make things better. This ethic will serve you well. The most important thing you can become in life is an engaged citizen.”

Bhavna Shyamalan, PhD, Co-Founder and Vice President of the M. Night Shyamalan Foundation, received an honorary degree and served as the Commencement speaker for the Graduate Ceremony.

In an emotional address, Shyamalan expressed her appreciation for being asked to speak at a University that aligns so closely with causes that she is passionate about and fights for in her daily work. “One of my deepest values is to stand against injustice,” she said.

Admittedly terrified of speaking before hundreds of graduates and their families and friends, Shyamalan left graduates with a powerful message about overcoming insecurities in order to put your unique imprint on the world—a lesson she herself learned after quitting her long path toward becoming a therapist, not because she didn’t want to do it anymore, but because she was afraid that she would make mistakes. When her husband was experiencing a peak in his career with much notoriety, she shrunk into the background.

“I decided I needed to change how I lived my life. First thing I did, I got comfy with risk. Embrace risk. Say ‘yes’ and worry about it later. You don’t have to know everything to start doing, you just have to start. Risk disapproval. Risk disagreement. We agree because it’s uncomfortable to disagree. Change requires uncertainty and uncertainty is uncomfortable.”

During both ceremonies, President Taylor sent graduates off, as he has done in each year of his presidency, with “Live long and prosper.”