On Monday, Oct. 16, Cabrini students, faculty, and staff, as well as community partners and educators, packed Grace Hall Atrium to officially launch the Center for Children of Trauma and Domestic Violence Education.

Lauding the vital work and support of Barbara and John Jordan—national advocates of domestic violence education who connected with Cabrini 10 years ago—President Donald B. Taylor, PhD, surprised the Jordans and the rest of the Cabrini community by announcing that the Center will be officially named the Barbara and John Jordan Center for Children of Trauma and Domestic Violence Education.

The Jordans were integral in starting Cabrini’s work with domestic violence education, and continue to work with Cabrini’s efforts through their passion, vision, and philanthropy.

“They have really pushed us to do this work that is so integrated with the work of the Missionary Sisters of the Sacred Heart of Jesus,” Taylor said.

“It’s because of [the Jordans’] commitment for advocating to make societal changes about domestic violence and the effects it can have on children that we have been able to provide programming, deliver professional development, and travel nationally and internationally to conferences,” said Colleen Lelli, EdD (’95), Associate Professor of Education and Director of the Center. Lelli also credited the successful integration of domestic violence education at Cabrini to faculty members who have taught the subject to students, collaborated with community partners, and conducted research.

WATCH: Video about the Center shown at the event

In fall 2010, Cabrini was awarded a Department of Justice grant, which enabled Cabrini to start an advisory board, write a manual to train educators about possible signs that a child may be witnessing domestic violence, and conduct a survey to provide baseline data about the levels of awareness in teachers about domestic violence and children of trauma.

Also in 2010, Lelli traveled to the White House to discuss Cabrini’s efforts, which is when she met Lynn Rosenthal, the first-ever White House Advisor on Violence Against Women, serving Vice President Biden. Rosenthal, who is now Policy Director for Violence Against Women Initiatives for the Biden Foundation, delivered the keynote at the launch event.

“On Oct. 5, 2011 … I visited Cabrini College for the very first time, and my life has never been the same,” Rosenthal said. “On that day, I saw here what I see tonight: a community rooted in education of the heart, as Mother Cabrini would say—a community that brings everyone together to take on its challenges.

“What’s made Cabrini such a leader? You sought out knowledge and experience. When you focused on children, you talked about children and their mothers. You looked at the national landscape and you said, ‘What’s missing?’ What’s missing is training teachers about domestic violence, and you knew that this is the perfect fit for your mission and you could fit that need. Your tenacity and courage influenced us in the White House.

“If I could ask anything of you, though, it would be to take this Center and step into your full power as a national leader in the movement to end domestic violence.”

The Jordans presented a framed mission of the Center to the University as a gift for helping their vision of educating teachers come to fruition. 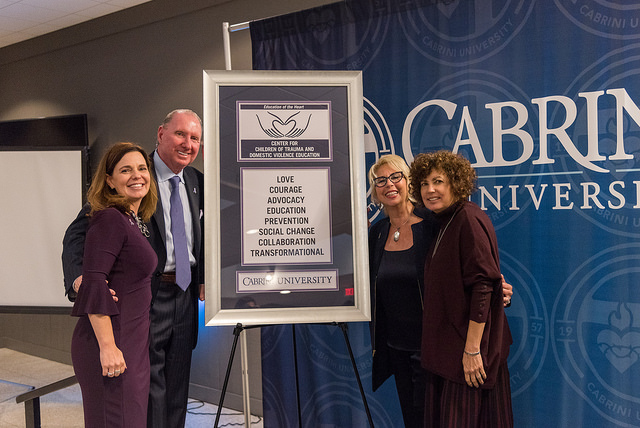 Earlier in the day, Cabrini hosted its seventh annual Domestic Violence Symposium, with the theme “A Family Perspective on the Tragedies of Domestic Violence,” an event that featured Keynote Speaker Janine Rajauski, whose sister, Nicole Peppelman, was murdered by her ex-husband in 2015. The event also featured a panel discussion with Bill Mitchell, President of the Kristin Mitchell Foundation; Minna Davis and Monica Jenkinson of Laurel House; the Jordans; and Eliza Costoso, PsyD, Cabrini University.

Peppelman was a mother of three boys and had divorced her husband, after years of abuse, just two months prior to her death.

Rajauski wanted to emphasize—especially to students who are statistically most at risk for domestic violence—that it can happen to anyone, without any clear warning signs.

“There were no signs before they got married,” Rajauski said about her former brother-in-law’s abusive actions. It wasn’t until Peppelman got pregnant with their first child that Rajauski started to notice that something seemed off. In fact, many people he was close to were shocked to learn that he had murdered Peppelman. He had presented himself to everyone outside of the family as a trustworthy, dependable friend, husband, and father.

As her abuser’s controlling behavior got worse, Peppelman stayed with Rajauski and her family. “We were Nicole’s safe house. She left her abuser at least five times. Her top priority were her children and our top priority was to keep them all safe,” Rajauski said, citing that statistics show it will take a woman an average of seven tries before she leaves for good. After Peppelman would go back to her home, Rajauski said she wouldn’t hear from her sister for months, which is common in people who are abused, as abusers often isolate their victims.

“Now, raising Nicole’s children, we are seeing first-hand the effects [of abuse] on the children,” Rajauski said. For instance, at first, Peppelman’s children wouldn’t acknowledge each other and hid in their rooms, likely a self-protection method that they carried with them even after they were out of the abusive environment.

Through all of the years of trying to protect Peppelman prior to her murder, and now raising Peppelman’s three boys along with her own four children, Rajauski acknowledged that there is no manual for the right way to handle a situation like this.

“I don’t know what the answer is, but the one thing that is right is to support the person who is being abused,” she said. 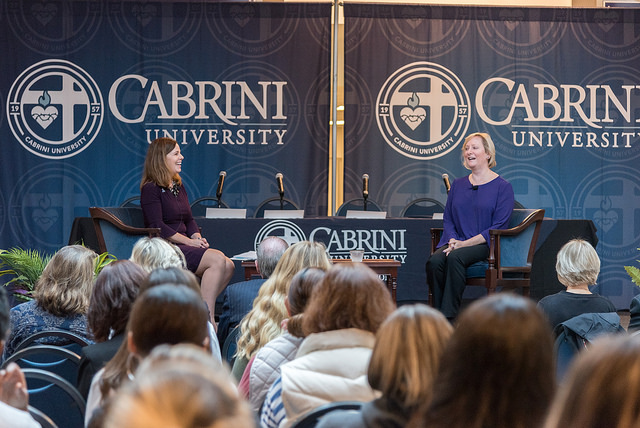 Colleen Lelli, EdD ('95), and Janine Rajauski have a conversation during the Symposium's keynote