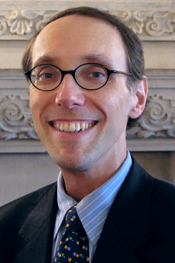 Radnor, Pa. (July 29, 2014) – Cabrini Professor and Chair of Religious Studies, Leonard Norman Primiano, Ph.D., was named a 2014‑15 Andrew W. Mellon Regional Fellow in the Humanities by the Penn Humanities Forum of the University of Pennsylvania.

This marks the second distinction this year for Primiano, who in March was one of only six educators in the nation to receive The Kennedy Center/ Stephen Sondheim Inspirational Teacher Award (2014).

The Regional Faculty and Professional Mellon Research Fellowships are awarded each year to a small number of faculty, directors, or curators from Philadelphia-area colleges, universities, and cultural organizations who wish to conduct research on that year’s Penn Humanities Forum topic.

However, some awardees of the 2014–15 fellowships extended beyond Philadelphia to include faculty from George Washington University and Howard University, both in Washington, D.C., and Reed College in Portland, Ore.

Recipients are awarded $5,000 and present their research at one Mellon Research Seminar in either the fall or spring semester on the Penn Humanities Forum topic for that year.

The 2014–15 Forum topic is Color, which, according to the Forum’s website, “invites a dialogue between practitioners and humanities’ scholars working at the intersection of color and meaning.”

“My project concerns the intersection of color and meaning in American sectarian religion, specifically examining the use of color in the African American minister Father Divine's International Peace Mission Movement,” he says in his proposal for the fellowship.

Primiano’s research project builds upon his 20 years of scholarship on American religion, folklore and folklife, much of that engaged in an ethnographic study of Father Divine’s International Peace Mission Movement.

His two-decades of research has focused ethnographic and analytic attention on how the International Peace Mission’s religious culture expressed in architecture, song, food, and photography maintains stability and cohesion within this historically interracial, but highly African-American, belief-centered sectarian religion.

Earlier this year, Primiano’s essay, “‘And as we dine. We sing and praise God’: Mother Divine’s Theology of Food” was published in the anthology, "Religion, Food, and Eating in North America," released by Columbia University Press.

For more about the Penn Humanities Forum, visit, http://humanities.sas.upenn.edu.