RADNOR, Pa. (March 26, 2014) –
Cabrini College Professor and Chair of the Religious Studies department Leonard Norman Primiano, Ph.D., is one of only six educators in the nation to receive The Kennedy Center/ Stephen Sondheim Inspirational Teacher Award (2014).

He was nominated for the award by his former student, Cabrini alumnus John Pino ’07.

The award recognizes American teachers annually by spotlighting their impact on the lives of students. Primiano was chosen from hundreds of nominations that included teachers from kindergarten to college.

Award recipients each receive $10,000 and are showcased, along with the people they inspire, on a website dedicated to inspirational teachers. 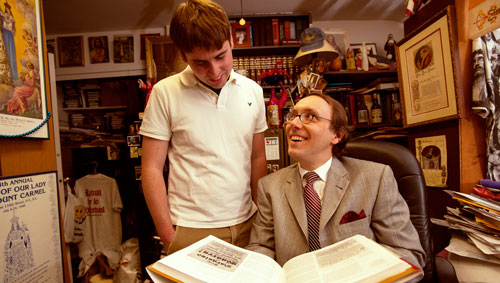 In his nomination letter, Pino recalls Primiano’s continued focus on and attention to his students even after the animated professor was diagnosed with esophageal cancer that resulted in the surgical removal of his vocal chords.

“Even in the face of this life-changing disease he made sure I had what I needed to be successful,” Pino wrote.

“After he had returned from the hospital I was invited over to his house where he helped me to finish my essay for graduate school ... the loss of such an important tool would keep many from returning to their former life. Dr. Primiano not only went back to teaching, he never stopped.”

After graduating from Cabrini, Pino received a master’s of liberal arts from the University of Pennsylvania and now teaches English at Winslow Township High School in New Jersey.

When told that he would receive the award, the full-time professor who continues to provide his students with engaging lessons through an electrolarynx device that creates and amplifies his voice, said he was “speechless.”

The award’s namesake, noted composer and lyricist Stephen Sondheim, frequently attributes his success to the teachers in his life.

The awards were created in honor of his 80th birthday in 2010 and were initiated and funded through the generous support of Freddie and Myrna Gershon.

Founded in 1957 by the Missionary Sisters of the Sacred Heart of Jesus, Cabrini University is a Catholic institution that empowers students to become advocates of social change through an Education of the Heart, focusing on academic excellence, community engagement, and leadership development.