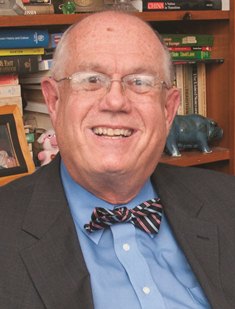 RADNOR, Pa. (Feb. 26, 2014) – Seventy years after a U.S. bomber crashed into the small village of Freckleton, England—killing 61 people, more than half of them children 6 or under—Cabrini Professor Jim Hedtke, Ph.D., brings the village to life in his new book, “The Freckleton, England, Air Disaster: The B‑24 Crash That Killed 38 Preschoolers and 23 Adults, August 23, 1944.”

Hedtke, who has taught history for 40 years at Cabrini and has written books on lame duck presidents and the personal trials and triumphs of civil war soldiers, first learned about the catastrophe during a visit to meet his wife’s pen pal who has lived in Freckleton her entire life.

“It’s surreal and heartbreaking that a small town with a population of only 1,000 experienced a tragedy that wiped out nearly 10 percent of its population,” Hedtke says.

“I knew immediately that I want to tell their story and give the victims a voice.”

The book examines the history and aftermath of the air disaster and follows the lives of the servicemen and villagers up until 2012.

Their devastating story began when, on Aug. 23, 1944, the pilot of an American B‑24 Liberator was unable to navigate a sudden and severe thunderstorm which crash landed into the village of Freckleton (next to the air base), demolishing Holy Trinity grade school, three houses, and a snack bar.

Before the fire could be brought under control, 61 civilians, including 38 children ages 4‑6, were dead. 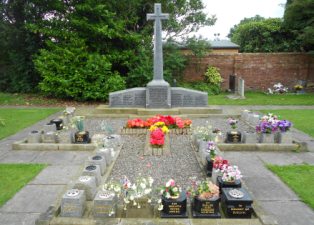 The communal grave in Freckleton, England

Research for the book began when Hedtke and his wife, Judy, first visited Freckleton in 1986. The two met Judy’s pen pal of nearly three decades, Jackie Martin, who told them of the tragedy and brought them to the communal grave.

Since their inaugural visit, and with the help of the Martin family, Hedtke is able to tell the story of the Freckleton Air Disaster through his meetings with the survivors and families of those who perished.

The book looks at the history of Freckleton, the establishment of the base at Warton, the crash, the funeral of the 61 victims, the official British inquest and the American investigation into the crash.

Hedtke is currently scheduling speaking engagements and presenting his research at upcoming events.

Where the book has been featured:

The book is currently available through McFarland and Company, Inc. and Amazon.com.

Founded in 1957 by the Missionary Sisters of the Sacred Heart of Jesus, Cabrini University is a Catholic institution that empowers students to become advocates of social change through an Education of the Heart, focusing on academic excellence, community engagement, and leadership development.