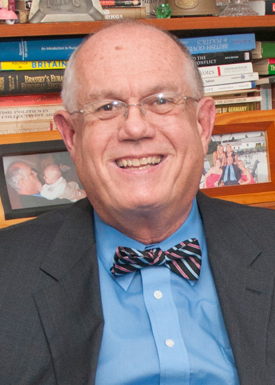 Since joining the History and Political Science Department in 1973, James Hedtke, PhD, has extensively published and presented his research to local and international audiences.

An expert on the American presidency, the Civil War, and World War II, Hedtke has been a featured guest on multiple programs including WHYY Newsworks Tonight, POTUS 2016(CUNY), NBC10 In Focus, and the Christian Science Monitor.

His research interests include the American presidency, the United States Civil War, and World War II, as well as research on the Freckleton Air Disaster, which took place in 1944 when a United States Army Air Force B-24 Liberator crashed into the center of the English village of Freckleton, Lancashire.

He has authored three other books, American Civil War: Facts and Fictions,  Lame Duck Presidents: Myth or Reality, and Civil War Professional Soldiers, Citizen Soldiers and Native American Soldiers of Genesee County, New York: Ordinary Men of Valor, the latter of which he edited and researched with students.

He writes book reviews for Choice, a higher education magazine, and is a member of the Southeastern Pennsylvania Consortium for Higher Education (SEPCHE) Speaker’s Bureau.

He also has made numerous presentations to area audiences on the presidency, terrorism, and the American Civil War, including one at the Pennsylvania Civil War Show commemorating the war’s 150th anniversary.

Hedtke earned a bachelor's degree from Saint Joseph’s University, a master’s from Villanova University, and a PhD from Temple University.

American presidency; electoral college; lame duck presidents; the United States Civil War including general Emory Upton who is considered the father of the modern army; World War II including the letters of Brad McManus and the Freckleton Air Disaster