Each year in the United States, 400,000 people are arrested, detained, and deported, trapped in what leading immigrant rights activist and lawyer Alina Das calls the 'deportation machine.' They are people who politicians like President Trump would have us believe are 'bad hombres.' But while we're debating border walls, travel bans, child detention, and quotas, these individuals are banished from their homes, their families, and their communities, and by a country that celebrates itself as a 'nation of immigrants.' As Das explains in her urgent book, we cannot break the pattern of the abuse and marginalization of immigrants in the U.S. until we understand fully how the system works. And in this country, that means understanding how racism and criminalization intersect to doubly punish communities of color. Das traces the history of immigration policy, showing how its evolution has always been linked to racist exclusion. Combining these systems exacerbates the flaws in both-and when 1 in 3 Americans has a criminal record, millions are caught in the crosshairs. Das weaves the history of immigration with moving narratives of those who have been caught up in the deportation machine, including Aba, a hardworking mother of four young children; Ely, a survivor of the crack epidemic in the 1980s; and Alonso, a DACA recipient. In deconstructing the 'criminal alien' narrative, No Justice in the Shadows offers an essential path forward: an inclusive immigration policy premised on human dignity, due process, and respect for all people.

Alina Das is an immigrant rights activist, lawyer, and professor at New York University (NYU) School of Law. Professor Das is the co-director of the NYU Immigrant Rights Clinic, a leading institution in national and local struggles for immigrant rights. She defends the rights of immigrants facing deportation and partners with community groups on immigrant rights campaigns. Her legal scholarship has been published by leading law journals and cited by the U.S. Supreme Court. She is the author of No Justice in the Shadows: How America Criminalizes Immigrants (Bold Type Books, April 2020).

Protect, Serve, and Deport exposes the on-the-ground workings of local immigration enforcement in Nashville, Tennessee. Between 2007 and 2012, Nashville’s local jail participated in an immigration enforcement program called 287(g), which turned jail employees into immigration officers who identified over ten thousand removable immigrants for deportation. The vast majority of those identified for removal were not serious criminals, but Latino residents arrested by local police for minor violations. Protect, Serve, and Deport explains how local politics, state laws, institutional policies, and police practices work together to deliver immigrants into an expanding federal deportation system, conveying powerful messages about race, citizenship, and belonging.

Amada Armenta is an Assistant Professor of Urban Planning at the UCLA Luskin School of Public Affairs, where she specializes in the areas of Race and Ethnicity, Immigration, and Crime and Justice. Amada earned a M.A. and Ph.D. in Sociology from UCLA, and a B.A. in Political Science from Rice University. 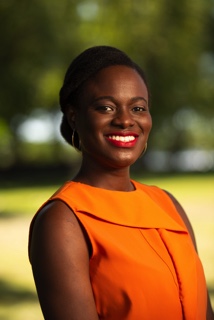 Black women living in the French empire played a key role in the decolonial movements of the mid-twentieth century. Thinkers and activists, these women lived lives of commitment and risk that landed them in war zones and concentration camps and saw them declared enemies of the state. Annette K. Joseph-Gabriel mines published writings and untapped archives to reveal the anticolonialist endeavors of seven women. Though often overlooked today, Suzanne Césaire, Paulette Nardal, Eugénie Éboué-Tell, Jane Vialle, Andrée Blouin, Aoua Kéita, and Eslanda Robeson took part in a forceful transnational movement. Their activism and thought challenged France's imperial system by shaping forms of citizenship that encouraged multiple cultural and racial identities. Expanding the possibilities of belonging beyond national and even Francophone borders, these women imagined new pan-African and pan-Caribbean identities informed by black feminist intellectual frameworks and practices. The visions they articulated also shifted the idea of citizenship itself, replacing a single form of collective identity and political participation with an expansive plurality of forms of belonging.

Annette Joseph-Gabriel is a scholar of francophone literature, culture, and politics. Her research focuses on race, gender, and citizenship in the French-speaking Caribbean, Africa, and France. Her book, Reimagining Liberation: How Black Women Transformed Citizenship in the French Empire (University of Illinois Press, 2020) mines published writings and untapped archives to reveal the anticolonialist endeavors of black women in the French empire. Her articles have appeared in peer-reviewed journals including Small Axe, Slavery & Abolition, Eighteenth-Century Studies and The French Review. She is a recipient of the Carrie Chapman Catt Prize for Research on Women and Politics. She is also the managing editor of Palimpsest: A Journal on Women, Gender, and the Black International and production editor of Women in French Studies.

Within days of taking office, President Donald J. Trump published or announced changes to immigration law and policy. These changes have profoundly shaken the lives and well-being of immigrants and their families, many of whom have been here for decades, and affected the work of the attorneys and advocates who represent or are themselves part of the immigrant community. Banned examines the tool of discretion, or the choice a government has to protect, detain, or deport immigrants, and describes how the Trump administration has wielded this tool in creating and executing its immigration policy.

Dean Shoba Sivaprasad Wadhia is the Samuel Weiss Faculty Scholar and Clinical Professor of Law at Penn State Law in University Park. Her research focuses on the role of prosecutorial discretion in immigration law and the intersections of race, national security and immigration. She has published more than thirty law review articles, book chapters and essays on immigration law. Her work has been published in Emory Law Journal, Texas Law Review, Washington and Lee Law Review, Harvard Latino Law Review, and Columbia Journal of Race and Law. Wadhia’s first book, Beyond Deportation: The Role of Prosecutorial Discretion in Immigration Cases, was published by New York University Press in 2015, and named an honorable mention for the Eric Hoffer Book Award. Her new book, Banned: Immigration Enforcement in the Time of Trump, was released in 2019 by New York University Press. Wadhia has also co-authored an immigration textbook, Immigration and Nationality Law: Problems and Solutions, with Steve Yale-Loehr and Lenni Benson, published by Carolina Academic Press in 2019.

After planning her escape from her village in northern Guatemala at fourteen, she traveled through Mexico alone, was robbed by narcos in the mountains of Chiapas, rode the boxcars of La Bestia, and organized thirty of her fellow Central American bus passengers to convince the Federales who had arrested them to allow them to continue on their way. Finally, she made it to the US border, where she was caught by US Immigration in the Arizona Desert. After four months in a detention center, she was shipped to Philadelphia and placed in foster care while the courts decided whether to deport her. After having to recount her story several times, the judge determined it was too dangerous for her to return home and finally granted her a green card. She spent a year in a horrendous foster situation with a family that took her in for the money, and eventually landed on her feet with a family that loves and protects her. She is now in high school, while she works to support her family back home and makes plans to go on to nursing school. dreamsandnightmares.org

When she was seventeen, Liliana wrote a remarkable memoir, Dreams and Nightmares / Sueños y Pesadillas, which tells of escaping unrelenting violence and poverty in her village in Guatemala at fourteen and heading out alone to seek safety in the United States. On her trip through Mexico she was robbed by narcos and rode the boxcars of La Bestia. Finally, she made it to the US border, and headed out across the Sonoran Desert, where she encountered death and was caught by US Immigration. She thought her journey was over, but it had just begun. She spent months in detention and ultimately gained asylum status in the U.S. She currently is in college and supports her family back home. Liliana shares her story in schools, universities and communities and gives workshops for teachers on using oral histories in the classroom to talk about the place of immigrants in our communities.

As Liliana says in her memoir, this is her personal story, but it is also the story of over 300,000 other minors who in the last six years have fled horrific violence and poverty in their countries in Central America and Mexico, and traveled north without their families in search of safety in the United States.

Currently, more than 14,500 undocumented youth are housed in detention centers—basically prisons—while awaiting the decision of the immigration courts about whether to deport them and return them to the poverty and violence they fled, or whether to grant them safety here in the United States.