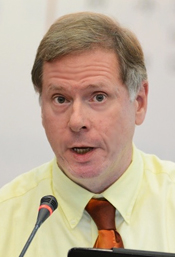 The cornerstone of a solid liberal arts education is recognizing the past, according to Paul Wright, PhD. He encourages his students to detach themselves from the present moment and revisit the past, and the foundations that brought the world to where it is today.

Wright, who earned a BA in English from Northwestern University and a PhD in Comparative Literature from Princeton University, currently is researching several projects. He is completing a book-length study of Machiavelli, entitled The Alloy of Identity: Machiavelli's Florentine Histories Reclaimed.

In September 2007, he traveled to Florence, to participate in the European University Institute's seminar on "Comparative and Trans-National Approaches to the History of Europe." In December 2007, he presented a paper on "The 'Future Tense' of Humanist Revolution" at the Modern Language Association Annual Convention.

Wright is an avid reader and cinema fan, and also loves to explore new places in the U.S. and abroad. He lived in Japan for four years, and travels regularly to China and Italy. He is originally from Chicago, and resides in Philadelphia.